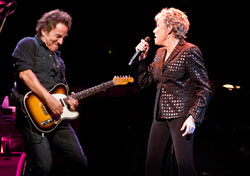 I made it the whooole day without falling for an April Fool’s prank. That is until I read the Backstreets review of last night’s show in Vancouver, BC. Good God, I believed the Anne Murray bit. I believed until I saw the Photoshopped Weird Al on stage with Bruce. *shakes head*

Here’s the opener from Seattle a couple of nights ago: Jimmy Cliff’s “Trapped” – a tune that also made it into last night’s non-April Fool’s Vancouver set list!

Ever heard the Jimmy Cliff original? Vastly different than the E Street version…