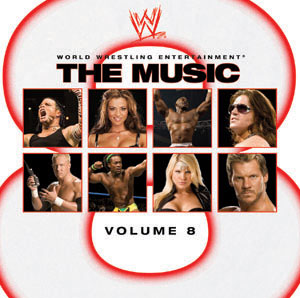 I can’t call myself a fan of the rasslin’, but my buddy Charlie sure is. It’s time for Charlie to spread the good word of the WWE… – Pete

Professional wrestling is a lot more than big, sweaty men throwing each other around in tights. True to their name, the WWE (World Wrestling Entertainment) truly tries to entertain their fans. Music plays a huge role in wrestling today. Back in the early 80’s wrestlers started playing music to accompany their walk to the ring. Wrestlers would use popular rock songs when this practice first started. Welcome to the future. Now, most of the songs used for entrance themes are all original.

It is a very exhilarating feeling when you’re sitting in a crowded arena and the music of your favorite wrestler blasts across the sound system. People start cheering or booing after the first seconds of the songs. Only sick, demented wrestling fans like myself would understand that feeling. The WWE just released WWE: The Music, Volume 8, the latest installment in the company’s top selling series. There are 14 tracks on the CD, and you’ll find a heavy rock influence to most of the songs. My favorite is the song “Break The Walls Down”. It’s the entrance theme for a guy named Chris Jericho. You might recognize him because he was the lead singer for a group called, Fozzy. The music matches his persona in the ring perfectly.
Check out this cd and the next time the WWE has a live event in your town, buy a ticket and go be entertained for a couple of hours. It beats reality!

Music and Ads: Let Me Sleep On It