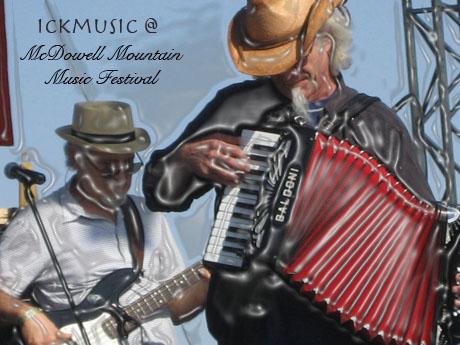 When you show up to at a music festival to pick up your press credentials, and you’re handed a VIP pass with 12 free drinks ready to be punched, at a Sierra Nevada-sponsored festival, well – you just know it’s gonna be a great day. Nine hours later – after seeing and hearing the likes of Gov’t Mule, Robert Randolph and the Family Band, Grace Potter & the Nocturnals, the subdudes, Steve Reynolds Band, and Mikel Lander, Meridith Moore & Friends – I was right, it was great.

This was my second straight year at the Friday offering of Scottsdale’s McDowell Mountain Music Festival. It’s a young festival (this was it’s 5th annual), and with the impressive lineups, the great organization, and so much room at the Westworld venue to expand, it’s going to pick up steam and continue to grow each year. So on this Friday, my partner in crime was my friend Greg. Let me take you through our day…

Mikel Lander,Meridith Moore & Friends – By 1:30 in the afternoon, we were seated front & center in our lawn chairs, Sierras in hand, and ready for some quality tunes. Local act Mikel, Meredith & Friends did not disappoint. Mikel Lander is a talented singer and guitarist from Tempe with a strong and natural voice that channels the early bluesmen and Tom Waits. Meridith Moore is no slouch with the pipes either, a terrific blues singer who is a great complement to Mikel. 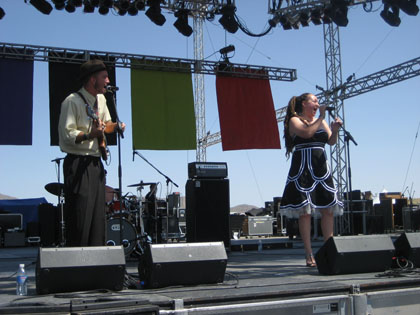 The band played some originals from a forthcoming CD (release party coming up at the Rhythm Room on May 24th), and some covers – highlights for me were Curtis Mayfield’s “People Get Ready” and a rollicking “16 Tons” – a song that really sums up their style – raw, blues-soaked, sort of old-timey. Good stuff. I’ll be checking them out in town.

Steve Reynolds Band – Okay, truth be told, we spent the first 3-4 songs of Steve’s set in the air-conditioned Fender tent, which featured complimentary tequila tasting, wine tasting, a small acoustic stage, chips and homemade salsa, and walls full of cool guitars. Can you blame a couple guys for getting stuck in there for a few? What we did hear of Steve’s set was one tune with a soprano sax that had us cursing Kenny G. – but they made up for it in a big way with Sonny Landreth’s “Congo Square”, their tip o’ the hat to New Orleans.

the subdudes – The subdudes came on about 15 minutes late due to some technical snafus being worked out, and unfortunately didn’t extend their set to accommodate for the late start. So we only ended up getting about 40 minutes of the ‘dudes from New Orleans. 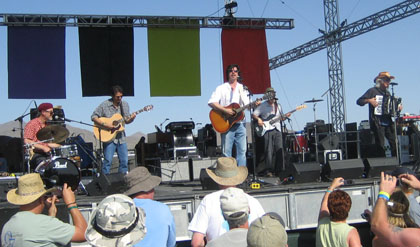 But a quality set it was… With tamborine -man / drummer Steve Amadée providing that unique subdudes backbeat (he doesn’t have a normal drum kit, just a bass drum, snare, and a tamborine), Tommy Malone on lead vox and guitar, and the the recognizable white billy-goateed John Magnie on accordion, the ‘dudes tore through songs like “Late At Night”, “All the Time in the World”, and “Fountain of Youth”. The New Orleans flavor is always welcome in the desert. Just wish we could’ve heard more.

Grace Potter & the Nocturnals – This was my third time seeing Grace and the Nocturnals, and by far the best performance I’ve seen. The stars were aligned just right at this point in the afternoon. The sun was starting to crawl down to the western horizon, we were near the front of the stage, a few Sierra Nevadas had us at optimal buzz level – and Grace Potter – well, her jam-band sex-kitten switch was fully flipped to the ON position. Tearing through originals like “Sugar”, “Sweet Hands”, and “Ah Mary”, she worked the stage, whether it was perched at her Hammond B3 and Rhodes, or front and center with her flying V electric. 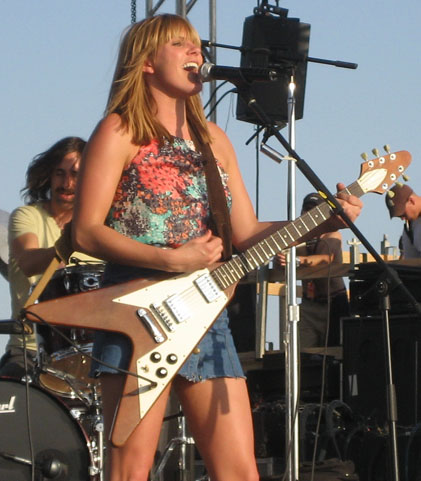 The Nocturnals were not slouching around either. The band was on, with some impressive guitar solos from Scott Tournet, and some bangin’ drum work from Matt Burr. Grace and band shone during their cover of Otis Redding’s “Pain In My Heart”. I was able to grab this….

My Ickmusic cohort in crime that day, Greg, called Grace the best female singer he had ever heard live. In thinking back myself, I can’t think of much better myself… hmm, S.O.S. Band, 1986? Nah (true story, by the way). Big kudos to Grace and the Nocturnals. I am won over.

Robert Randolph & the Family Band – There were a lot of nice moments in Robert’s set. He is one fun guy to watch with his signature moves on the pedal steel, and his band’s brand of jamband funk n’ soul. There were a lot of moments that had me thinking of Sly & the Family Stone – particularly “I Need More Love”, which quickly had us move into Michael Jackson territory, as the tune morphed into “Don’t Stop Til You Get Enough”. You haven’t lived until you’ve seen a bunch of hippies sing “Mamma say mamma san a makusa..” Another killer tune was “Summertime”, which featured some crazy-funky interlude with the strobes going and, well, it just hit the spot. You know those certain funky, head shaking breaks that you never want to end? This was one of ’em. You can hear what I’m talking about here (from another show). 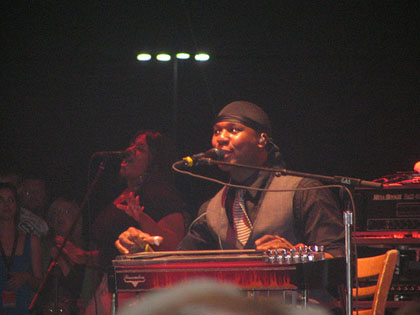 Gov’t Mule -The Mule came on as scheduled at 9pm to wrap up the day of music. You gotta give Warren Haynes and his band due props. The guys have the blues-rock groove down pat (Warren Haynes and the late Allen Woody left the Allman Brothers in the mid-90’s to start the band). Highlights were the slow, aching blues of “Brand New Angel”, the Muddy Waters meets Zeppelin sound of Muddy’s “Streamline Woman” which went right into a tune made popular by Zeppelin: “I Can’t Quit You Babe”. Then there was the blues-reggae of “I’m a Ram”. Later on, it was time for Grace Potter and her guitarist Scott Tournet to return for a smoking version of Al Green’s “Take Me To The River”. To wrap up the night, Robert Randolph joined in for “Soulshine”, an inspiring blues number that first appeared on the Allmans “Back Where It All Begins”. 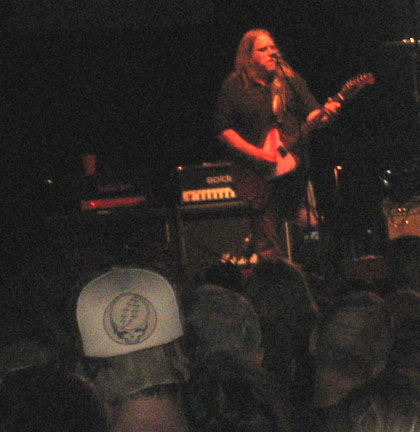 Wrappin’ It Up:On a weekend that saw the opening days of Jazz Fest in New Orleans and Coachella across the desert in Indio, California, I was happy to have my own option here at home in the McDowell Mountain Music Festival. And I didn’t even catch Saturday’s lineup: Blues Traveler, John Butler Trio, the Wailers, Toubab Krewe, among others. A pretty impressive gathering of talent for such a young festival, if you ask me. What excites me is the promise this festival shows. It’s an impeccably organized event, and the coordinators should be commended, top to bottom. Of course, getting the VIP treatment always helps to put a positive spin on things. With a bottomless supply of Bill Johnson’s BBQ, Sierra Nevada’s full menu of beers, a beautiful, sunny day in the Arizona desert, and great tunes wafting through the air – it was a day I savored. Damn, does that beat working .