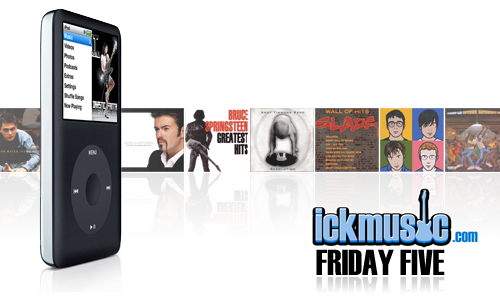 Well we’ve reached the end of “The Theme Days of Summer” and for this weeks playlist I thought it only appropriate that we send off the summer with an ode to endless summer nights and the changes coming as some head back to school, some back to work, and all of us close the book on the summer of ’08.

Match ANY of the following conditions

As Pete pointed out last week’s mood was rather dark so this week I’m looking to brighten the mood and get everyone ready for the weekend (though I’m steering clear of the puppies, unicorns, sunshine, and fairies). The friends of the five have come through all summer sharing everything from show-tunes, jazz, folk, blues, funk to metal and everything in between. I hope everyone has enjoyed the playlists as much as I’ve enjoyed thinking them up and sharing, next week we’re going back to the general shuffle.

For those who have not joined in the Five, here’s how it works: … I hit the shuffle button on my iTunes and share my five with some words (much more this week than last) for each track.

Then it’s your turn! You can play along with the themed playlist or just share the first five of your shuffle, either way the fun is in playing musical voyeur for the day.

While I don’t particularly care for much of the current crop of R&B artists I make an exception when it comes to Ne-Yo. This track was prominently featured in this past year’s season of So You Think You Can Dance which just further endears the track to me.

2. Black Sabbath – Changes (from We Sold Our Soul for Rock ‘n’ Roll)

Originally from 1972’s Black Sabbath, Vol. 4, this was the first Sabbath tune to feature the Piano as its primary instrument. I’ve always liked this tune for how un-Sabbath it was and it was clearly a precursor to Ozzy‘s penchant for balladry.

3. Prince – Sex in the Summer (from Emancipation)

If there is a truly underappreciated record in Prince‘s discography then I’d suggest 1996’s Emancipation is it. While time has proven unkind to some of the records tracks (“My Computer”, “Emale”) others stand as brilliant testaments to the time in which it was released. This track is quite bittersweet in that a recording of Prince & Mayte’s child’s (which died shortly after birth) heartbeat is featured as part of the percussion.

The second encore tune performed when I saw John Mayer last Saturday evening (read the full review here). He plays this one pretty straight and true to the recorded version. I’ve included it here just because I dig it so damned much.

John Mayer – Waiting on the World to Change (MP3)

5. Boyz II Men – End of the Road (from Legacy – The Greatest Hits Collection)

This one definitely resonates with that “back to school” sound (even though this particular track was released after my School Daze) and feels like a perfect end cap to the “The Theme Days of Summer”.

So what’s taking you home early on this holiday weekend?