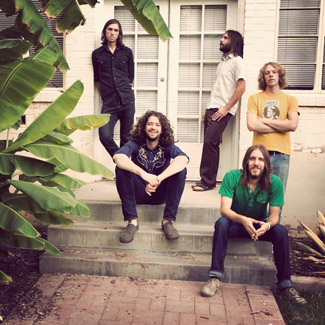 What Laura Says. A band from my neck of the woods,  Tempe, Arizona (where every day I miss my home around the corner from Casey Moore’s). Looking at their pic here, you may be quick to judge. “Oh, hippie music! Deadhead muckety muck, don’t want it!” Ah, but dont ‘be so quick to judge. Sure, they have a side that will appeal to the psychedelic / jamband set. But there’s also a side that taps into late era Beatles. A side that taps into the Beach Boys. Little Feat. Canned Heat. Ben Folds. Dr. Dog…

But let’s stop the comparisons. What Laura Says manages to mix together a veritable tasty stew of genres. This album has followed me around for many weeks now. I’m so happy to have discovered “one of those” albums where you unearth something fresh and new with each listen. One of those albums where one song’s fabric weaves into the next, so if you pop one song on your iTunes, it doesn’t seem right without it’s companions. An album that is wholly original, quirky, and unique.

The album is an adventure – changing tempos and styles. The gentle harmonies of “Couldn’t Lose Myself If I Tried” kicks off the album with a banjo accompaniment and a happy go lucky lilt. Before you know it you’re off on a piano-driven, hand-clapping pop tune. Then comes “Fashionably Moral”, a haunting nod to raunchy Delta blues with a speeding freight train interlude. The clean joyous harmonies of “Illustrated Manual”. And how to describe “Wish I Could Fly”? Gorgeous harmonies, a melody that will have you singing along before the song ends – “boy I wish I could fly-y-eye-y-eye” – and a most-satisfying percussion frenzy toward the end.

There’s “Dot Dot Dot”, which you could easily argue owes to the likes of Simon and Garfunkel or Kings of Convenience. There’s “Waves” – a lazy summer daydreaming love song, which, for me, delivers the best 1-2 punch of the album with the next song-  “Get Better Soon” – a down home double backbeatin’ backwoods jam. “Don’t worry about me, it’s you that needs the help”, it starts (and just gets better).

Harmonies and melodies. Melodies and harmonies. Gah! I love this album!

And then I saw them live. Two words I uttered to myself as I got in the car to drive home from their CD release party at the Rhythm Room a couple weeks ago: “Holy.” and “Shit.” These guys blew my mind live – charismatic, quirky, having a good time, but very serious about delivering a quality set. They seem light years more mature than a young, upcoming band. Their live show is an experience – and if you’re in Texas, California or Vegas, you have a chance to catch them within the next couple of weeks…

So listen, I’m not blowing smoke up your ass because I’m gaga over a hometown band. These guys are the real deal, and I’d be gushing just as much if they were from Nome, Alaska.

What Laura Says – Jasper Corrine – this is a non-album track that sounds like a George Harrison-penned outtake from the White Album. I include it here because I’m not posting anything from the record except for “July 23”, which has the band & label’s blessing – and which you can still hear here.

Cruise over to their MySpace and say hi. And make sure to listen to “Wish I Could Fly” and “Couldn’t Lose Myself If I Tried”, which they have streaming.

Thank you. Carry on.

How Keef Handles the Stage Crashers