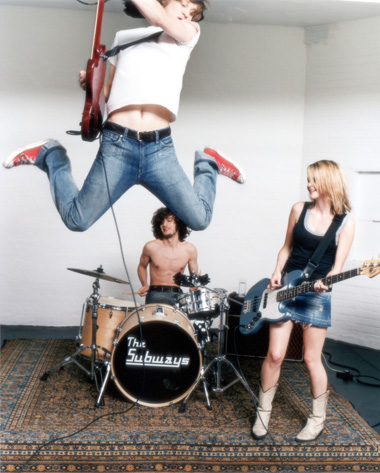 In April of 2006, Billy Lunn, guitarist, singer, and songwriter for the Welwyn Garden City, Hertforshire, England trio The Subways, was diagnosed with nodules on his vocal chords. They canceled several appearances in support of their wonderful first album Young For Eternity, including one that I had tickets for here in Minneapolis. Doctors said that years of intense screaming during his songs may have damaged his voice permanently and it was entirely possible that he would never sing again. His scream, in many ways, is one of the best in the history of rock and roll. It epitomizes that Janovian wail that only true disciples of the medium can capture and convey. An excellent example of its supremacy can be heard in the song “Rock & Roll Queen“, from Young For Eternity, a high-octane, balls-to-labia shag tune that is a must for any playlist. Shortly after the diagnosis, Lunn and his girlfriend (and bass player in the band), Charlotte Cooper, broke up. The question of whether the band would even continue weighed pretty heavily on the band. With the future of the band in doubt, Billy started writing.

And what we wrote has become the album of 2008.

In fact, it may be the album of the decade and is, without a doubt, in my top 25 records of all time. To borrow from the late Heath Ledger from Brokeback Mountain, I can’t quit this album. It is absolutely infectious on just about every level. As I listened to it the first few times, I could smell the beer, the smoke (if not illegal in your city), the vodka-Red Bulls, the sweat, the women, and the absolute human glory that is the CLUB. Every time I listen to it I get the urge to be body passed in a slimy, hoard of humanity…my Chucks flailing uncontrollably…as I revel in the majestic splendor of the pit.

Much of this feeling is due to the stellar production work of Butch Vig (of Garbage and Nirvana fame), and one really gets the sense that this is the next logical progression from Nevermind… Brit-Style. The first four songs are like Ali’s fucking fist (“Girls and Boys”, “Kalifornia”, “Alright”, and “Shake Shake”), pummeling you with such might that you are immediately brought to your knees in gratitude for hearing such great music. The next track, “Move to Newlyn”, is a wonderful travelogue that brings you on a journey of self discovery around the United Kingdom. We get back into the power with the title track “I Won’t Let You Down” (his scream at the end…OMG!), “Turnaround”, and “Obsession”, the latter of which has a terribly haunting harmony vocal by Charlotte.

Then we get to the track of the album: “Strawberry Blonde”. To say that this song is gorgeous is the understatement of… history. It is three levels above gorgeous and there hasn’t been a word yet invented to define the truth and beauty of this instant top ten love song. The album finishes with “Always Tomorrow” and “Lost Boy”, another shovel-to-the-head stunner of a track.

All or Nothing was finally released in the US a couple of weeks ago. It has been available since June in the UK. I bought it a few weeks after the UK release date when I saw no US date on the horizon. The fact that it has taken this long to release it is proof positive that American record company execs have their heads firmly up their arses regarding what is and what is not good music. I have listened to it pretty much every day since I bought it and still have not grown tired of it. You won’t either. No one will.

Because Billy approaches life like I do…fucking mega or fuck you…All or Nothing….and it is magnificent. Thank God.

Buy All or Nothing…

Austin City Limits and a Band of Horses