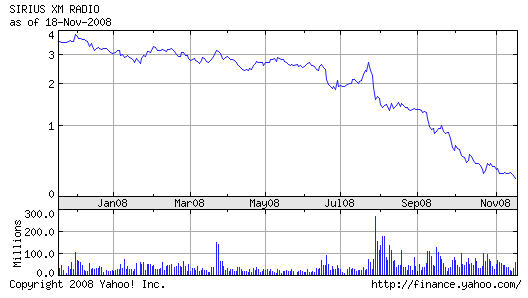 I’m starting to wonder if I’ll hear anything on my receiver when I start my truck six months from now. I’m wondering if this downward spiral can ever make a significant rebound.

Maybe it only truly appeals to a certain segment of society, primarily music lovin’ geeks like me. I LOVE my SiriusXM Satellite radio!! Granted, I’m sort of pissed about some recent consolidations of “redundant” stations that eliminated two of my favorites – Backspin and Sirius Disorder – but the selection of music (commercial-free) is so far better than terrestrial radio that you can’t even make the comparison.

I’m surprised satellite radio isn’t a lot more popular than it is. But given the economy, the availability of music on the internet (iTunes, music discovery sites like Last.fm, Pandora, and Rhapsody), music on smart phones, and the looming collapse of the U.S. auto industry – well, things ain’t looking so bright for SiriusXM.

Me? I’ll be subscribed until Satellite Radio is six feet under. Sorry, I need my variety of music. I need another way to discover new music. And dammit all, I need my Howard Stern!

You guys and gals are music lovin’ fools like me. Who can’t live without their satellite radio? Who could give a rat’s behind?

Beyonce, I WOULD put a ring on it, but I gotta clear it with the wife