I know that my posts here have been minimal for some time. I’m busy looking for a job, wrapping up the dissertation, and playing Rock Band 2. But I promised Pete that my New Year’s resolution would be to post here with more frequency. This is a way to (potentially) force more regular posts out of me. I’ll just say that these will be “regular” or “occasional,” though I’d like to shoot for “monthly.” I make no promises.
I present the first of a new “column” so to speak, Between the Cracks. The series will focus on forgotten, underrated and misunderstood albums that are worthy of reexamination. 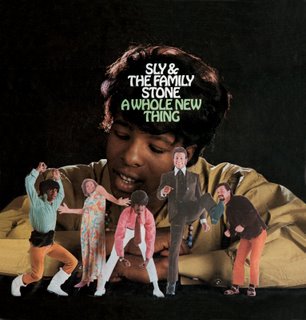 This edition takes a look/listen to the 1967 debut from Sly and the Family Stone, A Whole New Thing.

Truth be told, this post has been stewing in my mind for over a year. Last Christmas (2007), my girlfriend gave me the Sly and the Family Stone boxed set – all seven albums, remastered with bonus tracks. I’d coveted this set since it’s release, and was eager to devour it thoroughly. I’m pretty familiar with Sly’s catalog already, but put A Whole New Thing on my stereo with some hesitancy. The common problem with these comprehensive collections is that the artist’s best work is often sandwiched between generally uninteresting developmental early material, and bland, mediocre final albums.

Within 30 seconds of hearing the album’s opener, “Underdog” however, I felt like Sly had slapped me across the face with a fistful of funk for having doubted him. Playing the song a few days later for a fellow music geek and drinking buddy, he was similarly floored. And that’s kind of the way A Whole New Thing works as a whole – it’s a solid, sophisticated dose of soul and funk that shows surprisingly no weaknesses for a debut album.

But then the question remains – why is this disc largely forgotten?

My ponderings on this point were reignited recently while reading Nelson George’s Death of the Rhythm & Blues, where George briefly mentions Sly’s “debut” album, Dance to the Music. I was a bit flabergasted as to how or why a well-versed music journalist (and arguably, a music historian) would brush right over A Whole New Thing.

Perhaps it’s because the album did nothing commercially. Upon release, A Whole New Thing failed to chart at all. Indeed, it wasn’t until the aforementioned followup, Dance to the Music, that Sly and the Family Stone gained any substantial notoriety.

Nevertheless – hindsight is always 20/20, and it is this blogger/geek’s opinion that A Whole New Thing can stand strong with the rest of Sly’s classic catalog.

The album is admittedly more focused on the soul side of things, likely indicative of the time. In 1967, Motown and Stax were still going strong, maintaining their hold on the youth record buying public. Yet A Whole New Thing isn’t merely a Motown ripoff. In fact, it’s one of the more interesting soul records that I’ve ever heard.

“The Underdog” is undoubtedly the album’s strongest track, and its opener. Beginning with a minor key version of “Frere Jacques,” the song quickly jumps into a punchy, uptempo romp with strategically placed one-measure breaks where we can all catch a breather. I admit it’s become one of my ass-kicking anthems.

The rest of the album generally stays within the soul genre, but does so in a refreshing way. Yet even within the soul genre, A Whole New Thing is all over the place – cut time barn burners (“Turn Me Loose”), soulful downtempo ballads (“Let Me Hear it From You,” “This Kind of Person”), driving bass grooves cut with syncopated horn lines (“Bad Risk,” “If This Room Could Talk”), and tracks that would be sampled in classic hip hop cuts decades later (Public Enemy sampled “Turn Me Loose” for “Power to the People,” while “Trip to Your Heart” provides the groove for LL Cool J’s 1990 hit “Mama Said Knock You Out”).

One of the real treats of this release is the bonus track “What Would I Do.” I’m just going to let this one speak for itself, and leave you to ponder how in the world it was passed on as a single or album track.

It’s all here. A Whole New Thing has all the makings of a classic soul album, yet the world slept on it upon its release, and it remained forgotten even as Sly and the Family Stone rocketed to legendary status with their blend of soul, funk and pop music that laid the groundwork for so much of the music that followed (Funkadelic and Prince, to name but two). I highly recommend it. I’ll say that the Sly boxed set is one of the better multi-disc investments I’ve made (or received), although all of the albums are also available separately.

Until next time, I go back into the cracks.

Buy Sly and the Family Stone: The Collection