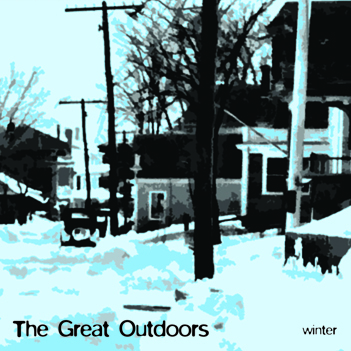 Canadian folk-rock collective The Great Outdoors have completed their ambitious project to write, record and release an EP for each season. The three preceding EP’s managed to perfectly capture the tone of each respective season and Winter introduces elements of blues and roots music to the mix to a stunning effect. “The Winter’s Touch” plaintive tenor closes the door and invites you in from the cold as Melisa Devost‘s beautiful voice warms your heart. “The Garbage Man Song” rambles along and features some distinctly Tom Waits influenced moments provided courtesy of guest vocalist Nickle City Slim. “No Bells” swings with a bluesy swagger that pays off with an in your face guitar accompaniment that would otherwise seem out of place. “Edison’s Genius” picks up where the previous track leaves off with its blues-tinged delivery but in place of place of guitars is a horn arrangement that recalls Monk‘s “Abide With Me”. The set wraps with “Snowdrop” a slow burn ballad. Check out “The Garbage Man Song” here and you can catch the rest of the release on the bands MySpace page.

Links: on Last.fm | on MySpace

Now Hear This: Best of the Inbox, Volume I