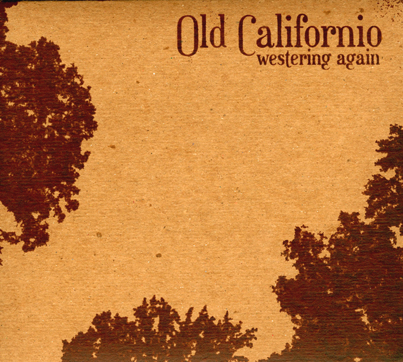 We all have those friends who decry the state of new music today. “All new music sucks!”, they say. Of course, some of these people think Creed was the best thing since sliced bread. Well, every time I hear these people, I now have another band to fire back with: Old Californio.

Last Friday, I opened up my snail mail to find their forthcoming CD, ‘Westering Again‘, inside. Instead of tossing it on the stack of CD’s I need to listen to, it went right into my car CD player. I don’t know exactly why. Cover art? Cool band name? Fate? How ’bout all of the above.

Less than 30 seconds into the opening track, a spiritual experience ensued. The song is “Mother Road”, and it’s easily the best tune I’ve heard all year. Rootsy, earthy, homegrown, purely American rock n roll – a perfect blend of inspiring, get-out-on-the-road lyrics, unforgettable riffs, great chord changes, and a harmonious sing-along chorus. If the Traveling Wilburys sprung back to life, this could easily lead off their third album.

You’ll understand after you’ve hit the repeat button 5 times and you’re singing along.

Old Californio is singer/songwriter/guitarist Rich Dembowski, Jason Chesny (bass), Levi Nuñez (keys, including some great B3), and Justin Smith (drums). The album was produced by the band along with Alfonso Rodeñas (Mark Olson, Los Tigres Del Norte), and recorded in their old chicken coop garage turned studio in Pasadena, California. There’s clearly a West Coast / southwest-y feel throughout the album. I hear shades of Dylan (“From the Mouths of Babes”), Calexico (the horns on “Riparian High”), and the Grateful Dead (during “Warmth of the Sun”, you’d swear that late 70’s-era Dead were morphing into “Not Fade Away”).

I’m an upbeat person by nature, and maybe that’s why this album connects with me so easily. Among the Californian soundscapes, the reverence for the great outdoors and the escapism, there is an undercurrent of positive energy – an “It’s good to be alive” vibe. I can get behind that.

Westering Again will be released on April 7th. I’ll post a links to buy when available. For now, keep these guys on your radar.