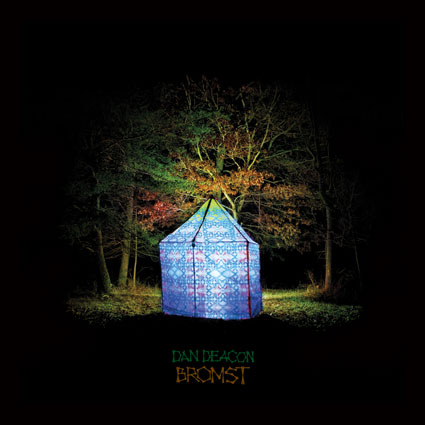 I’m one of the most open-minded listeners around when it comes to music. I can find something to like in everything – from classical to jazz to country to late 19th century Panamanian bordello jingles. So given that this was another “Release Tuesday” in which absolutely nothing piqued my interest, I decided to go way out there. I narrowed it down to Mastodon‘s new album ‘Crack the Skye’ – a progressive metal concept album about tsarist Russia – and the new one from Dan Deacon, a NYC-based experimental electronic indie rocker. After a couple listens to each, I settled on Deacon’s new album, Bromst.

The All Music review had some interesting buzz words that attracted me to the album – “Noise pop” and the “slowly burgeoning indie rock fetish of voices”, a la Fleet Foxes and Animal Collective. So I took some listens, and I realized this: if I was left locked in a room with this album playing over and over, I would quickly turn clinically insane. All due respect to Deacon and the people who enjoy this music, but this is clearly not for me.

The song that most leans toward the “fetish of voices” is “Wet Wings”, which brings to mind a creepy hospital ward full of Nurse Ratchetts rambling psychotically in the night.

There are some interesting moments, when a cool groove takes hold, and you feel yourself getting pulled in. But you quickly realize that surrendering yourself to this music is a sure trip to the funny farm. At least for me. This is some intense shizz… Dan, you’re a mega-talented dude, but you scare me.

Got headphones? Close your eyes, turn this up, and pee your pants…