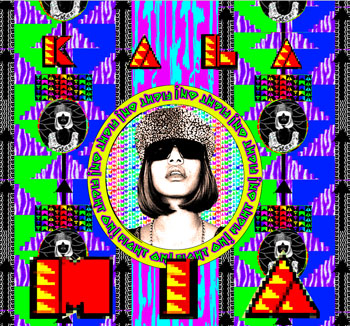 I respectfully defer to Wayne when I say: “Schwingg!”

Her follow up to her very successful debut, Arular, was released a couple weeks ago. It’s called Kala, and I have to say, I’m enjoying it even more than her first. I love cool sounds. This album has ’em. She had originally planned to get in the studio with Timbaland for this album, but problems with her visa blocked her for a few months (he did end up producing one of the tracks: “Come Around”.

So, she took the label’s money and did some globe trotting to pull in some tasty sounds. One of my favorites is her collaboration with Australian aborigine hip-hop group Wilcannia Mob, who are barely in their teens (if even that). That one’s called “Mango Pickle Down River”, and features a wicked didgeridoo.

She’s also cool enough to incorporate the Clash into a song. “Straight to Hell” sets the tone on the Diplo-produced “Paper Planes”.

Here’s the album opener. “M.I.A.’s coming back with Power Power!” Crank it up and enjoy. Great album… tasty beats, bangs, and zooms. And she’s hot to boot.

I’ll be checking her out live in two weeks at the Austin City Limits Music Festival. Who’s in?

Come Over to Jeb's Yard, Get Your Heaven Right Here