The extended Ickmusic family has been out catching some quality live gigs this month. Tonight, my old friend Jason gives us a detailed account of his night with Mike Watt this past Saturday down New Mexico way… – Pete 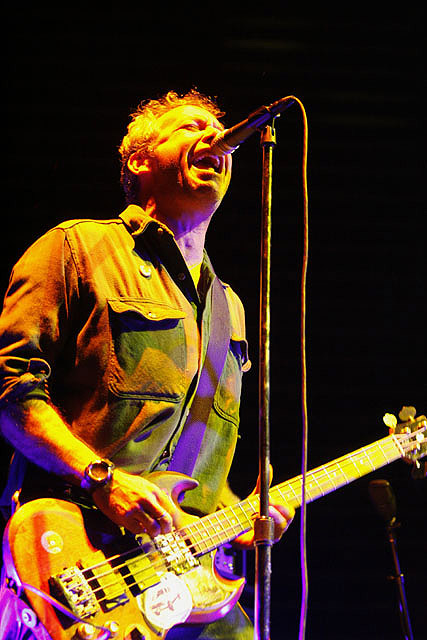 For those unacquainted with Mike Watt’s work, let me relate an eavesdrop from outside Saturday’s show, during a nicotine infusion:
“So, who’s playing tonight?”
“Mike Watt,” said the fan to his tagalong, “bassist from the Minutemen.  You know them?”
The fan was met with a blank stare.
“He’s kinda in the Stooges now, for the last couple albums and tours…  C’mon, MIKE WATT, you know him.”
The fan was met with a blank nodding head.
“Well,” said the fan, “you secretly know him.”

And that may be you, dear reader.  You’ve heard The Minutemen.  You’ve heard of fIREHOSE or Banyan.  You certainly know The Stooges, and have been meaning to pick up their latest album, The Weirdness

.  You sort of remember when Sonic Youth did those Madonna covers.  When your friend played you that Gov’t Mule cover of CCR’s “Effigy“, your head bopped soulfully.  You may have even thought guiltily to yourself, “Man, this Kelly Clarkson song actually kinda rocks.”

In other words, you too secretly know Mike Watt.

And so you find yourself, wandering into that little venue downtown, where hipsters and rockers congregate, where the 30+ crowd is pleased to discover tonight is 21+, not like that mind boggling 18+ MC5 show.  You cough up a $10 cover and choke down some $9 tequilas, switch to $1.50 PBR, and make your way toward the stage to hear Mike Watt, Tom Watson and Raul Morales practice their latest rock opera.

“Really?” the girl you brought asks, “Rock opera?”  The strains of Bohemian Rhapsody burn behind her eyes.
“Well ostensibly,” you answer, citing the interview read earlier in the local rag, “it’s about Walt Whitman, The Wizard of Oz, mortality, and jackalopes.  But it’s not completed, or quite ready.  So tonight they’re just practicing.”

And then you notice the man brushing through the crowd from the bar wearing a gig bag like a backpack.  “Oh, that’s Mike Watt,” you think.  He takes the stage, preemptively tunes, adjusts the mic stand.  And then the band explodes.
The first barrage of the power trio is so loose, rather, so… not tight, with double bass thuds popping just slightly too far behind the frenetic drums, you think, “Hmmm, they really do need practice.”  But it’s a ruse.  Watt screams, “COLTRANE!!!” into the mic, and they’re off.  “Oh yeah, this is Mike Watt,” you say.

Dear reader at this point, I should point out that I didn’t attend the show with forethought of writing this review.  Hence, I have no up-the-nose, front row, cell phone pix for you, no shaky, EQued-out YouTube vids, nor even a desultory set list.  I did recognize a few covers, The Stooges’ “Fun House” and Wire’s “Three Girl Rhumba”, to name a couple.  But mostly I was violently entranced by the complexity of the noise, the raw punk energy of the performance.  Watt appeared to be alternately attempting to swallow his tongue or spit it from his mouth like a wad of chewed Fruit Stripe.  He barked lyrics like a berserker Tom Waits.  Watson crafted rhythm riffs and feedback drones into a driving, irresistibly head-banging gale. I think Morales had three drumsticks.  This is opera?  I like opera.

I dunno. If you were writing this, how would you describe this music?  Zappa conducting with a tungsten fungo bat?  The Stooges dragged behind a rockabilly locomotive?  Capt. Beefheart covers Muddy Waters with a timebomb strapped to his balls?  You wouldn’t wax so poetic.  “It’s Mike Watt,” you’d simply say, “You know.  You secretly know.”

And you do.  You know that Watt’s gracious low-key smile is genuine.  You know that when he thanks the smallish audience for, “being so kind,”  he truly means it.  When he asks, over the mic, if anyone has, “a safe place for our boat (his van) and a place for us to crash tonight.”  You just know it’s not odd.  Mike’s on tour.  Mike jams econo.  When he curses, “the machines,” after his mic stand falls slowly to the stage for the umpteenth time and states, “This one’s the timber machine.”  You know he’s actually punning, “the timbre machine.”  When he personally sells you a t-shirt after the show and calls bullshit on the fact they’ve run out of some sizes after only two gigs, you know the band stickers he gives you really are an apology.

But most of all you know, as you step into the night, that you will most definitely show up for the next practice.

Leonard Cohen Giveaway: The Winner is...

Sweating under the Gaslight: The Gaslight Anthem @ the Clubhouse in Tempe