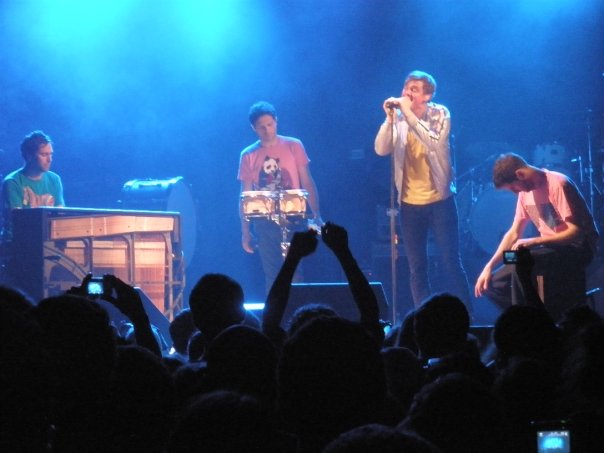 “Everyone knows that the biggest wankers in any band are the drummer, the keyboard player, and the lead vocalist. And that’s their whole band, innit?” So sayeth Noel Gallagher on the subject of Keane. While there is a small grain of truth to what the elder of Brit Pop says, Keane is still a massively good band.

The first time I saw them, back in 2004 on their Hopes and Fears tour at Quest (formerly Glam Slam and home of the sound system that gargles old-man-in-a-rest-home-testicles), honestly, they didn’t need any more than those three instruments. Richard Hughes’s drums were explosive. Tim Rice-Oxley’s (could he HAVE a more Brit sounding name?) keyboards filled the full melodic and sonic spectrum. And Tom Chaplin?

The voice of a fucking angel.

I challenge any of you Ickmusic fans to listen to “Bedshaped” and not have your heart melt into a lysergic acid diethylamide–induced water colour of gut wrenching, broken hearted nostalgia. There is a man or woman out there – for all of you – who is the purest definition of this song. So with all due respect, Noel – you are incorrect.

Imagine my surprise when Keane took the stage last Friday night at Myth in Maplewood (see: essentially Wisconsin) with a bass player in tow and Tom sporting a…Fender guitar?

After three albums, Keane has decided to build upon their three piece arrangement and expand their width of vision. Their new album, Perfect Symmetry, gives a giant shout out to the entirety of the 1980s while sounding wonderfully modern at the same time. Their first track of the night, “The Lovers Are Leaving,” found me reminiscing of Roxy Music (Avalon era), ABC, and Spandau Ballet, yet remaining fully entrenched in a 00’s dream pop bliss. As their set progressed, remaining mainly with their current effort and Hopes and Fears, I was perfectly and willingly trapped in that bliss.

Snapping out of hypnosis and midway through their set proper, the band left the stage to leave only Tom and…an acoustic guitar. Knowing what the next song would be (because I peeked at setlist.fm), I was stunned. One of my two favorite Keane songs: “Your Eyes Open”. An absolute stunner played with quiet certitude. Perhaps it was the minor key.

The band then rejoined him for the obligatory “unplugged” moment at the front of the stage. The first song from their second album, Under the Iron Sea, was played: “Try Again.” And then, in an extremely touching moment, Tom said, “We put this song in the set list earlier this afternoon, when it was quite sunny here in Minnesota. And then it started pissing down in English style!” Thus, we heard “Sunshine” and our hearts were warmed.

As the set concluded with more songs from Perfect Symmetry and the very last song of the set – the triumphant “Crystal Ball” – I found myself hearkening back to the awkwardness of the 8th grade dance…the 80s rag back in full force…wondering if falling in love for the first or last time was ever worth it. They left the stage to exulting hand raises and the anticipation of…the encore…and…that song. THE song.

It was nice to hear a new song (“My Shadow”) at the start of the encore. It was even nicer to hear more from Iron Sea, the other hit from that second effort, Is It Any Wonder?. The anticipation was palatable. The crowd could taste it in the air. Their hearts were ready. Mine certainly was.

And then it came.

Starting with the warmth of gentle kiss, building to an orgasmic cascade of sonic love in its purest form, and then going back and forth between the two…mother fucking “Bedshaped”… played with all of the softness and terror that all things carnal bring. As the final notes echoed through the club and the band left the stage, I shuffled off the floor of the pit through the empty cups and bottles. And, as it always is with Keane…my heart warmed and broken at the same time.

Keane will be playing in DC, Philly, Boston, Toronto, Cleveland, Montclair, and NYC in the next two weeks.