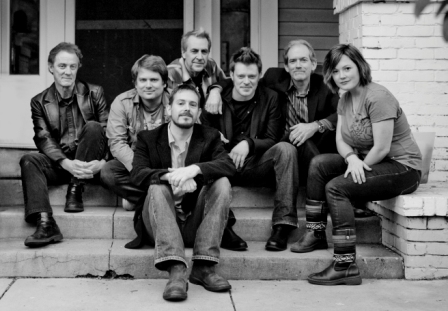 The music collective known as Works Progress Administration is heading out on tour to support their self-titled debut, which is to be released on September 15th.

At the core of Works Progress Administration (or WPA, for short) is the trio of ‘Founding Directors’ Glen Phillips (Toad the Wet Sprocket), Sean Watkins (Nickel Creek, Fiction Family) and Luke Bulla (Jerry Douglas Band, Lyle Lovett). In addition to the base is the group of ‘Executive Board Members’ consisting of Sara Watkins (Nickel Creek), Benmont Tench (Tom Petty and the Heartbreakers), Greg Leisz (Joni Mitchell, Bill Frizell), Pete Thomas and Davey Faragher (Elvis Costello and the Imposters). The collective explains the origin of their name…

Works Progress Administration takes its name from FDR’s 1939 New Deal initiative, which put millions to work making buildings, bridges, theater, art and music. The original WPA was rooted in the values of community and creativity, and helped to keep the fire of human dignity burning through the darkest years of the Great Imposters.

Eschewing the usual “supergroup” clichés, WPA appears to be a truly community driven project with collaboration at every level. Vocal duties are shared across the board with each core member contributing lead vocals. The lead-off track “Always Have My Love” is an catchy uptempo number featuring Phillips lead vocals and layers upon layers of fiddles and pedal steel that give the track a depth that can sometimes be lacking in modern Bluegrass / Alt-Country recordings.

Wu-Tang is for the Children!