This is what I was thinking as I drove, barely 40 mph, east on Interstate 94 from my home in the Twin Cities to the party capital of the world.

It was last Friday afternoon, October 23rd, and I was on my way to hang out with my friend George. He had called me up two months ago to inform me that Fran Healy and Andy Dunlap, of the Scot band Travis, were playing an intimate acoustic show at the Majestic Theater in Madison, Wisconsin. I was about to buy tickets for the show in Minneapolis when I decided it might be fun to trek down there and see them with a pal I had known for quite some time.

George and I met on Day One of seventh grade. I had just started at a new school and walked into my home room. Sitting there, at a table by himself, was a somewhat dour looking George..also starting at a new school. I walked right up to him and said,

He looked at me warily and said, “mmm…George,” and shook my hand. That was September of 1979 and we have been great friends ever since.

We have always been VERY into music over the years and have seen many great bands throughout the course of our friendship. In too many ways to tell here, the bands we listened to were the soundtrack to our lives and, on many occasions, quite literally saved us. George had never seen Travis and was especially amped to see them at the Majestic. He had been raving about the venue as being a great place to see shows because of how small it was. Was it ever!

The Majestic Theater in Madison is only slightly larger than my finished basement. Even Fran, as he first came out on stage, wondered if he was in the right place. “Is this a town hall meeting for the borough of such and such?” he asked laughing. We all chuckled along but I certainly wasn’t laughing mere hours before.

Mother Nature, in her North Woods infinite pranksterism, decided a blizzard on October 23rd might a fun thing. For nearly 45 miles, with my knuckles whiter than a sheet, I drove (slid) through blowing winds, sideways snow, and exit signs – every one of which seemed to read “Alma Center.” Changing lanes literally made my testicles recede into my body cavity as my car fish-tailed constantly. The hope, warmth, and love that what I knew was going to be a mega show was the only thing keeping me going. I imagined myself sipping a beer and hearing the voice of an angel. 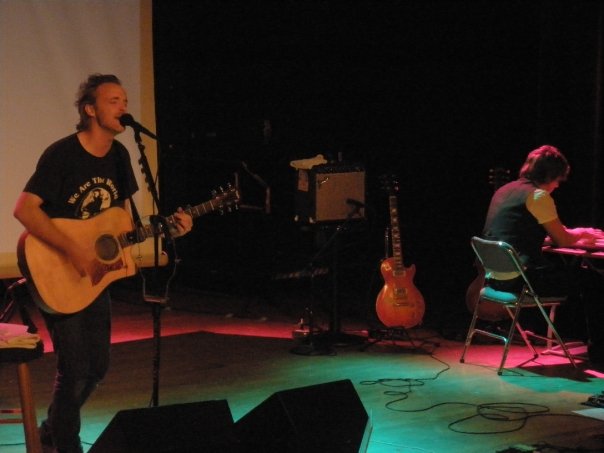 Just like that, I was there! And Fran was singing the first track of the night, “20.” He informed us straight away that this was going to be  a chronological journey through the Travis back catalog. In addition, he mixed a Powerpoint presentation and humor with each story he told before all of the songs in the set. “Falling Down” was inspired by the Michael Douglas film of the same name and…Joni Mitchell? During the song “Slide Show”, he and Andy literally showed one which included several pictures of the band and Paul Fucking McCartney, as the big red letters put it with an arrow pointing to Macca in a few of the snaps from over the years.

When “Driftwood” started, George leaned over to me and said, “This is my favorite Travis song of all time.” Definitely one of my faves too, and it sounded wonderful in this quiet and intimate setting. About half way through the song, George put his arm around me and gave me the bromance, two pats on the back. George has never been the hugest fan of physical affection so I counted this as being quite extraordinary and felt very blessed. Dude…

The rest of the set included “Sing”, “Side”, “Indefinitely”, “Love Will Come Through”, and “Closer”. Next up was “My Eyes”, which Fran dedicated to his son. Asking us not to take pictures during this song, he put up a few home pics of his boy and played the song with all of the love of a proud parent. “Big Chair”, one of my faves, was next and sounded magnificent. A new song called “Holiday” was played, which finished the set proper.

Out for the encore, Fran asked us what we wanted to hear. Several people shouted “Battleships” and still more asked for “Hit Me Baby One More Time”, the Britney Spears tune which Travis covered back in 1999. He said he would play both. “Hit Me” was just as good as I remember it, with the audience singing “still believe” in high falsetto which made Fran crack up several times. Andy came back out and they played “Good Feeling” followed by the last number of the night, “Battleships”, as promised.

As we left the venue, I spotted an official bootleg at the swag table for 10 bucks and snatched it up immediately. It’s the whole show complete with stories separated via track numbers from the music, so you can just hear the tunes if you like. I highly recommend it. George bought one too and we headed out into the night for an evening of pub hopping on State Street.

Played early in the set, the words from the song “Turn” reverberated in my ears in the crisp and cool autumnal night. I could have stayed home and seen them in Minny but went on an adventure instead. Sure, I almost careened off the road in a bullshit October snowstorm, but so what? The experience of the Majestic was completely worth it. More people in our “grandma and grandpa” nation need to fucking do shit like this.

As the song says…”there’s so much world outside the door”:)

Check TravisOnline for dates near you. There are several in NYC….wow!

New Matthew Ryan available, and hear another single: "We Are Snowmen"