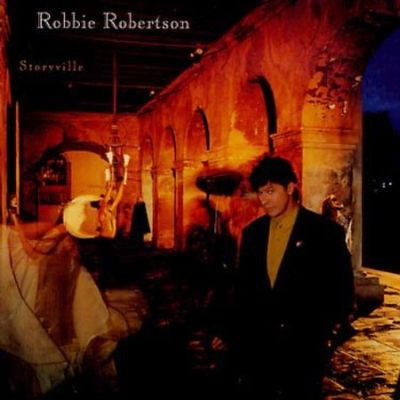 Not long ago, I unearthed an old cassette of Robbie Robertson‘s Storyville album. I’m trying to figure out my thought process during the LP/cassette/early CD years. Specifically, why I ever chose to buy cassettes – the least reliable and most easily damaged format possible. Well, I know why, actually. It was the car cassette player. Tunes in the car were mandatory – and the cassette was the only way to listen to your tunes on the road.

So I’d walk out of the record store every time with either an LP and a blank tape (later a CD and a blank tape), or the officially released cassette. Storyville was released in 1991, and I opted for the cassette only.

Paying homage to the Storyville section of New Orleans, the album features a who’s who of the Louisiana sound: a handful of Nevilles, the Rebirth Brass Band, George Porter, Big Chief Monk Boudreaux, Big Chief Bo Dollis… and a bunch of Robertson’s friends also make appearances: fellow Band members Rick Danko and Garth Hudson, Ginger Baker, Bruce Hornsby, Neil Young, Mike Mills, David Baerwald, and on and on and on….

It’s definitely an album to be ingested as a whole, since it sets an atmosphere and takes you on a journey through some great stories and characters. One of my favorites is this tune…

Robbie Robertson – Day of Reckoning (Burnin’ for You) [mp3] – from Storyville