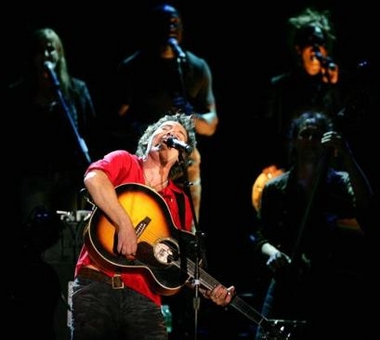 After the whirlwind schedule that Bruce and the Band have put themselves through the last couple of years, they’ve definitely earned some much needed R&R. And with some sort of hiatus underway (1 year? 2-3 years?), Boss Geeks like me start to speculate on what his next move might be. We know he can’t stay idle for too long, especially these days.

After The Rising Tour, 2005 and 2006 brought about two great albums and tours away from the E Street Band: Devils and Dust, and We Shall Overcome: The Seeger Sessions. Thankfully, Bruce made it through Phoenix on both tours. Seeing him solo was certainly a treat (as was the Tom Joad tour) – but that damn Seeger Sessions tour. Man oh man, what a show they put on!

Counting Bruce, the Sessions Band numbered 18 musicians & singers. Eighteen!  It was a joyous concoction of sound, as they tackled old folk songs, new originals (“American Land” and “Long Walk Home” debuted), gospel music… and then there were the Seeger Sessions tweaks to Bruce’s catalog. Well, more like overhauls than tweaks… from “Blinded By The Light” to “Ramrod” and “The River”, the results always brought out new elements in the songs, and seeing them performed by so many on so many instruments – steel guitar, banjo, trumpets, trombones, and tubas…

One of the best examples is how Bruce modified “Open All Night”, a track from the sparse acoustic Nebraska album. It’s actually one of the more uptempo numbers on Nebraska. But the Sessions Band took the song to another level – a piano and horn driven stomper right out of the 1950’s.

I put on the Live in Dublin DVD earlier this evening as my family and I set up the Christmas tree. The Sessions Band had everyone shimmying and shaking, but “Open All Night” really got the joint rocking. I gotta confess, I enjoy this DVD as much as any E Street live DVD, and as far as speculating and hoping and wishing goes – I hope Bruce gets the Sessions Band together for another tour!