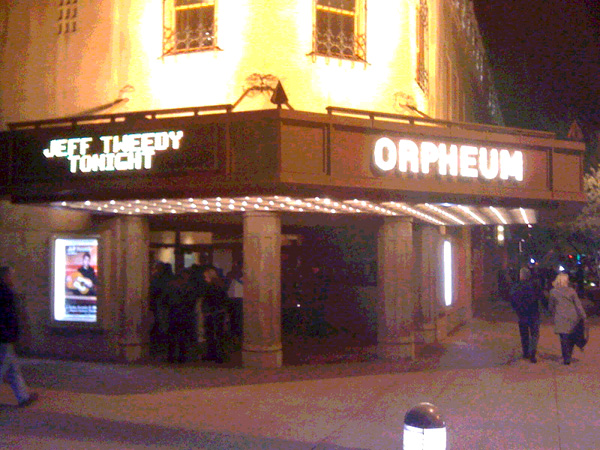 Seeing my favorite artists live in a full band setting is obviously one of life’s great thrills – Bruce Springsteen & the E Street Band, Steve Earle & the Dukes, Los Lobos, Wilco… But just as thrilling for me is witnessing more intimate showcases: the solo acoustic show. To be able to sit down and study the architect of the songs you love, as they play for you in a small theater – just the artist, a guitar and a microphone – you’re able to get a deeper understanding of the artist and his work.

I’ve had the privilege to sit and watch my favorites in these intimate-type settings: Springsteen on the Tom Joad and Devils and Dust tours, Steve Earle on several occasions, David Hidalgo & Louis Perez at a small theater in Tucson – and last night, Wilco frontman Jeff Tweedy.

I’ve followed Jeff and his band since Mermaid Avenue bowled me over in 1998. From that point, I’ve devoured everything they’ve released. For me, it all comes back around to that one unique characteristic: the golden, sweet & raspy vocal chords of Jeff Tweedy.

Last night, in the ornate and acoustically divine Orpheum Theater in downtown Phoenix, the voice was in prime form, filling the small venue – from low whispers to tuneful wails. I don’t mean to get all dramatic and schmaltzy on you all, but it was such a special experience for me and the several hundred that filled the theater. Outside of a few entertaining exchanges between songs, the crowd was perfectly quiet – letting each song live and breathe – with only the sounds of Tweedy’s voice and acoustic guitar wafting perfectly in the air.

Tweedy’s set list dipped into the Wilco songbook (e.g. “Passenger Side”, “A Shot in the Arm”, “Sunken Treasure”, “How To Fight Loneliness”, “Hummingbird”, “Impossible Germany”, “You & I”), his own solo material (“Bob Dylan’s 49th Beard”), Uncle Tupelo (“”Acuff-Rose”), as well as his side project/”supergroup” Golden Smog (“Please Tell My Brother” was one of the most poignant moments).

One great spontaneous moment came when he veered from the set list for a cover of the Handsome Family’s “So Much Wine”, a dark Christmas tale of a broken relationship. I had never heard the original, and clearly I was missing out on some wonderful lyrics:  “Where the state highway starts I stopped my car / I got out and stared up at the stars / As meteors died and shot ‘cross the sky / I thought about your sad, shining eyes.”    Picture Tweedy singing this in a mournful country shuffle… it was magic.

Another special moment came with “Jesus, etc.”, as Jeff shared vocal duties with the crowd. It wasn’t the messy sing-a-long you’ve heard at some shows. Rather, it was a very clear and succinct, spot-on rendition, and it made the small venue feel even smaller and more intimate.

After wrapping up “I’m the Man Who Loves You” (dedicated to his wife Susie, who was in attendance with his family), Jeff  stepped away from the mic for the last couple of  songs, standing at the edge of the stage with no PA. “This is what it’ll be like when we lose power”, he joked, referring to a post-apocalyptic world.

This moment summed up the entire evening… here was one of the most gifted singer-songwriters of our generation, in a one-off performance – and it wasn’t about the glitz and glamor of a rock ‘n roll band. It wasn’t about effects. And hell, it wasn’t even about amplification.. It was a man and his guitar singing his songs, playing from the heart and soul, and connecting with each and every one of us lucky enough to be in attendance.

Photos: Photographer Holly Carlyle snapped some incredible photographs from the evening. Check them out here.

Markadelphia's Best of the Noughties