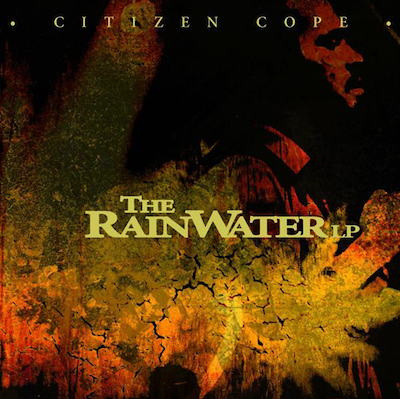 The Rainwater LP, the new album from Citizen Cope is out digitally today ($3.99!

). I’ve had a couple of spins through so far, and like what I’m hearing. This time around, Cope (Clarence Greenwood) focuses more on social justice, poverty, and world ills rather than matters of the heart – which is admirable in itself. But I do miss having a killer love song like “Sideways” or “More Than It Seems”, or the aching “D’Artagnan’s Theme”.

Some standouts for me so far: the reggae-soul infused “Off the Ground”, the funky bass line and accompanying synth-groove of “A Father’s Son”; and songs like “Keep Askin'”, “Lifeline” and “Healing Hands”, which showcase Cope’s forte – the laid back, no nonsense urban storyteller.

There’s definitely this type of formula building in Citizen Cope’s albums – but it’s a formula that works for him, and is unmistakably unique. Clarence Greenwood has a lot to say in his lyrics. There’s a lot about the world that bugs him, and he has a way of channeling his frustrations in a peaceful, subdued fusion of soul, R&B, and rock/pop sounds. But even with his laid back demeanor, you can still feel the passion, the power, and often the anger in his music.  Citizen Cope has carved out his own niche in pop music, and The Rainwater LP is another solid collection of tunes to add to an already impressive discography.

Be sure to catch Citizen Cope live. As anyone who has seen him will attest, once you do, you’re hooked in.

Super Bowl Sunday 2010 - Geaux Saints, Who Are You, hey it's the theme song from CSI!