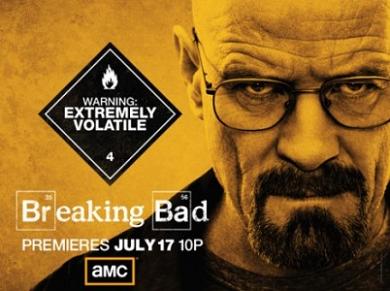 My month-long Breaking Bad frenzy has sadly come to an end. On September 24th, I decided to check out Episode 1 / Season 1, the pilot episode, on Netflix. Three and a half weeks later, I’ve watched every episode of all four seasons – and I’m desperate for more.

I can say without any doubt that this is the best television series I have ever watched. I had similar feelings about the genius of The Sopranos in its heyday, but my admiration for and obsession over Breaking Bad surpasses even that.

Breaking Bad follows the life of Walter White (Bryan Cranston), an Albuquerque high school chemistry teacher who – after being diagnosed with lung cancer – decides to join forces with a drug dealing former student of his (Jesse Pinkman – played by Aaron Paul) and become a methamphetamine cook. The goal is to tackle his growing financial problems, and to provide for his family when he’s dead and gone.

Walt and Jesse quickly go from small potatoes to working for the largest meth distribution ring in the Southwest. Insanity ensues – brutal violence, betrayal, fear… brilliant subplot after brilliant subplot. The relationships between Walt and the amazing ensemble cast of characters: Hank, his brother-in-law who also happens to be a DEA agent; Walt’s wife Skyler; his boss, Gus Fring; his lawyer Saul Goodman (played by the great Bob Odenkirk)… it’s all so well acted, so well written, and so utterly unpredictable.

I won’t go on and on, but I do want to recommend this series to anyone that may read this. Go to Netlfix. The first three seasons are streaming. Season 4 is available on iTunes. Get started and thank me later. Warning: it will become an addiction. Get ready for some late nights and weird dreams.

Music: One highlight of Breaking Bad is the great selection of music throughout (a quality also shared by The Sopranos). You’ll hear all sorts of great tunes for the first time. One example for me was in “Thirty-Eight Snub” (Episode 2 of Season 4). Jesse is trying to drown out his demons by surrounding himself in his home with acquaintances and large amounts of drugs. He also buys an expensive, supercharged sound system and gets lost in the loud music. At the end of the episode, the party has cleared out, and Jesse is left alone in his trashed house.  He cranks up “Digital Animal” by Austin’s Honey Claws, and collapses next to the speaker. The cool electro/hip-hop vibe coupled with Jesse’s darkness and desperation really makes for an intense ending. As for Honey Claws, it doesn’t appear they’re active anymore. It’s hard to tell. But this track rocks…

The AMC site has all the music listed for Season 1, Season 2, Season 3, and Season 4.