I’m knee deep in another great TV series courtesy of Netflix’s streaming. A couple months ago, I fell into Breaking Bad, and it was without question the best damn TV show I’d ever seen in my 40 plus years. I still believe that – but not far behind has to be FX’s Sons of Anarchy.

The series about a northern California motorcycle gang features the great Charlie Hunnam as Jackson “Jax” Teller, the VP of the Sons of Anarchy. I wasn’t familiar with Hunnam before this series, but it’s hard not to fall for his badass portrayal of Jax. You develop a bond with the whole motley cast of characters – Clay Morrow, the prez, played by Ron Perlman; Tig, Half Sack, Opie, Police Chief Unser… 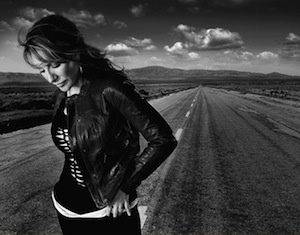 And then there’s Katey Sagal, who most of us know as Peg Bundy from Married With Children. Truthfully, not being a big TV guy over the years, I don’t remember even seeing her since her Peg Bundy days. But she’s been busy over the years as her IMDB entry will attest. And her Sons of Anarchy role as club matriarch Gemma Teller Morrow has blown my mind. Gemma is mother to Jax, and wife / “old lady” to club president Clay Morrow. She’s fierce and mean as a pitbull, but devoted, loving and oh, just a bit protective of her family. You love her one minute and despise her the next.

Toward the end of Episode 4 of Season 3 (‘Home’), a great version of Leonard Cohen’s “Bird on a Wire” began to play. It featured a soft, beautiful female vocal. A-Googling I went, and lo and behold, it is Katey Sagal singing (along with backup band The Forest Rangers). There’s actually an album out – Songs of Anarchy: Music from Sons of Anarchy Season 1-4 – that features a few other Sagal-sung songs, including “Son of a Preacher Man.”

The pairing of film & TV with the right music is a talent unto itself, and Sons of Anarchy picks some great music that is both familiar and unfamiliar to me. You can make some great discoveries this way. While I was loosely familiar with Cohen’s “Bird on a Wire”, I was never impacted as much by the song until I heard Sagal’s version while watching the ‘Home’ episode of Sons.

Well, better get back to the series. The boys are going overseas to Ireland, and some shit is about to go down.

UPDATE (Dec 6th): Rolling Stone just posted an interview with Katey Sagal in which she talks about her singing. I didn’t know that she’s married to the show’s creator, Kurt Sutter.