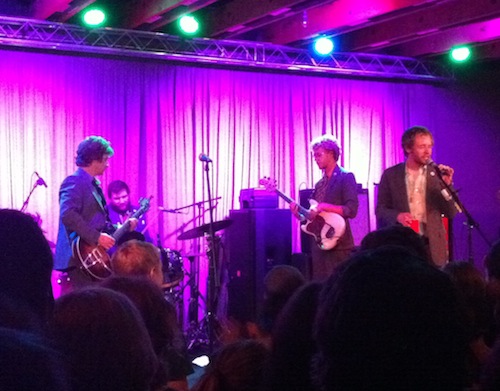 The great thing about Deer Tick live is the no frills, no bullshit, “it’s only rock n’ roll” attitude. Lead singer/guitarist John McCauley is the embodiment of it all. He’s clearly in it for the music, and doesn’t much care about self-image or putting on those rock band front man airs. But that’s not to say he doesn’t have a good time and doesn’t embrace some of the – um – rock star lifestyle.

Shuffling on stage last night with three bottles of Coors and the red plastic cup that was never too far from his grasp, John and the band rocked the face off the Crescent Ballroom last night – growling, spitting, and, yes, snot-rocketing his way through a 90 minute, 19-song set full of new tunes from their brand new album Divine Providence, along with some older tunes spanning their first three albums (most from their debut, War Elephant) and a couple of well-placed covers.

They opened with the great Divine Providence album opener, “The Bump,” which serves as a great introduction to the band: “We’re full grown men! / But we act like kids! / We’ll face the music / Next time we roll in“; and the ultimate intro to John: “I got a name / They Call Me The Bump / One night with me / Is gonna mess you up … I’m a drunken devil! / I’m not the king of cool!”

And off they went. The set featured 9 songs from the new album, including two sung by guitarist Ian O’Neil (the hard charging “Walking Out The Door” and the southern rock ballad-feel of “Now It’s Your Turn”) and one by drummer Dennis Ryan, “Clowning Around” (Dennis wrote the song about John Wayne Gacy). The first released single from the record, “Miss K”, is good-time rock at its finest, and really pumped the crowd.

John and the band are loose and relaxed between songs, noodling around like they’re in rehearsal. It’s fun to see. Between songs, we were treated to the theme from Law & Order, AC/DC’s “You Shook Me All Night Long”, and my favorite, drummer Dennis Ryan singing a verse of Santana & Rob Thomas’ “Smooth” – but sung as Tom Waits. Classic.

Deer Tick played five tunes off of War Elephant, including another highlight of the night, a slowed down “Ashamed” with a killer sax solo from Rob Crowell. Just as cool was the song they chose next, a raucous cover of the Replacements’ “Bastards of Young.”

Speaking of covers, the band also showed off their alter ego Deervana, with a spot on version of Nirvana’s “On a Plain.”

The night wrapped just after midnight, with the party anthem off the new album, “Let’s All Go To The Bar.” They were on for a full 90 minutes, but it still seemed short, and there wasn’t even enough time for an encore (I’m guessing the Crescent Ballroom curfew is 12 midnight). Everyone was ready for more, but it wasn’t to be. Instead, I made my way out back and chatted with the band for a few minutes (along with my smuggled can o’ Four Peaks Hop Knot IPA – shh).

To me, there’s nothing as invigorating as a solid, genuine, live rock n’ roll show. Deer Tick are as real as they come – an unaffected group of guys who clearly love playing music together and insist on having a great time doing it. It’s all for the love of the music – and luckily, those of us in the crowd get to come along for the ride.

The Bump
Easy
Baltimore Blues No. 1
Main Street
Chevy Express
Walkin’ out the Door
Ashamed
Bastards of Young (Replacements cover)
Clownin Around
Funny Word
Choir of Angels
These Old Shoes
Now It’s Your Turn
Miss K.
On a Plain (Nirvana cover)
Not So Dense
Mange
Let’s All Go To The Bar