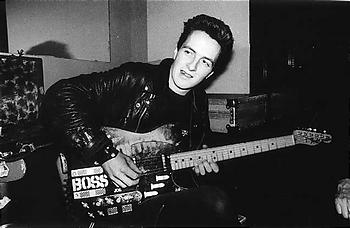 The one-hour film was shot over the last 18 months of Joe’s life. “It has been my blessing to share with the world an intimate portrait of such a passionate and humble man,” Rude said in a statement “Joe was a true hero. His music changed people’s lives. His love affected me profoundly. I am proud of the story he has allowed me to tell, but I would trade it all in a heartbeat to have him back.” Let’s Rock Again! opens with a montage of Clash-era footage of Strummer before ultimately settling into his stint fronting the Mescaleros. The film includes some stunning live performance footage and both frank and amusing interviews with Joe. (- from Strummersite.com)

Here’s a preview tune from the movie, a Mescaleros live version of “Global a Go-Go”. Hop on over to Stummersite for more info on the movie, and other Joe / Mescaleros stuff.

Joe Strummer & the Mescaleros: Global a Go-Go (live) (mp3) – Original version found on Global a Go-Go, released in the summer of 2001.

Get Funky with Cameo and Zapp