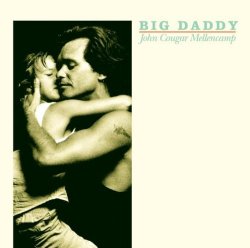 Damn the torpedoes, tonight my attention turns to John Mellencamp, and a couple of gems off his 1989 release ‘Big Daddy’. I’ve always paid attention to John’s work, and have several of his albums, though I really haven’t paid much mind to the last 10-12 years. On every album, there would always be a song or two that I got very excited about, but most of the time the rest of the tunes just didn’t stack up for me.

But man, he’s had some great tunes over the years: the early stuff obviously… “Jack & Diane”, “Tumblin’ Down”, “Authority Song”… and later on with tunes like “Key West Intermezzo”, “Last Chance”, and “Now More than Ever.”

But it’s these couple of tunes from ‘Big Daddy’ that rank right up there as my all time JM faves. “Jackie Brown” is my favorite. Beautiful acoustic guitars, and haunting lyrics about a down and out and desperate man…

The last hidden track on ‘Big Daddy’ is a cover of the Hombres’ “Let it All Hang Out”, a barnburnin’ rocker that get your feet a-shakin’.

John Mellencamp: Jackie Brown (mp3) | Let it all Hang Out (mp3) – both from Big Daddy

Bruce goes back to Freehold

Join the Caravan of Love