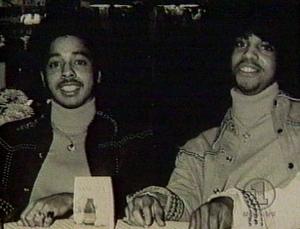 Here’s a cool snapshot of Prince’s Minneapolis scene before he struck it big with ‘1999’, and BIG BIG with ‘Purple Rain’. The date is March 8th, 1982. Location: the Minneapolis club First Avenue, which Prince made famous two years later in the movie ‘Purple Rain’.

It’s a small club gig with a loose, intimate feel. Towards the end of the show, Prince brings up a few members of the time: Morris Day, Jesse Johnson (guitar), Jimmy Jam (keys), and Jellybean Johnson (drums). The banter is pretty funny. You can hear the competitive edge between Prince and Morris, as they go back and forth in between songs. Prince: “y’all can play, but this is my stage tonight!”; “you gotta play some rock and roll, don’t come up here playing that you know what.” Morris: “say man why don’t you take my comb, you could use it.” Jimmy Jam: “Time for the Time. Time to kick Prince off the stage.”

Here’s the set list from the gig. Check out “Sexuality” thru “Partyup”. Throw them together in order and listen in to a fun, carefree, groundbreaking era in Prince’s “Minneapolis Sound”.

Sunday Morning on a Saturday