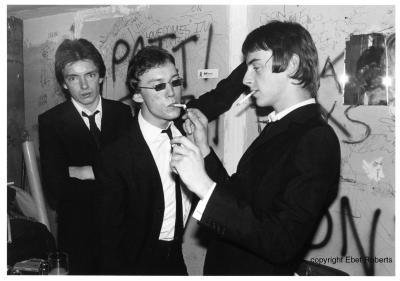 Over the last few months, I’ve posted live performances by the likes of the Clash, the Sex Pistols, and the Style Council. Therefore, I’d be foolish not to explore the live experience of the Jam. Made up of guitarist Paul Weller (who later went on to form the Style Council, and is still a huge solo act in the UK), bassist Bruce Foxton, and drummer Rick Buckler, the Jam rose out of Woking, Surrey, England in the mid-70’s.

They were influenced by the mod culture of the 60’s (the Who, the Small Faces), the punk ‘revolution’ of the mid-70’s (the Clash in particular), and, increasingly, the Motown / soul sound (which would become increasingly apparent on their later albums, and the work of the Style Council). While they are often lumped in with coming out of the same ’76-’77 UK punk revolution as the Pistols, Clash, Buzzcocks, and the Damned, they definitely insisted on maintaining their own style and identity, always sharply dressed in mod-style suits and ties.

This show took place on November 30, 1980 in Dortmund, Germany. They had just released their fifth album, ‘Sound Affects’, which Weller likened to a cross between ‘Revolver’-era Beatles and Michael Jackson’s ‘Off the Wall.’ The Beatles influence is apparent in the opening bassline of “Start!”, which is the same bass riff that opens “Taxman.”

The Jam disbanded in 1982, when Weller decided to call it quits to form the Style Council. The other two members apparently still hold some bitterness toward Weller about the break-up. They wrote a Jam biography in the early 90’s which contains some vicious attacks on Weller (has anyone out there read it?).

So here is a 75 minute set from The Jam, at the height of their popularity. Enjoy…

The Jam in San Fran