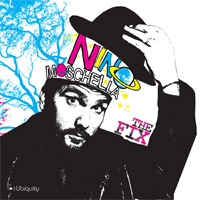 Well here’s the coolest Prince song I’ve heard in a while, but not from the man himself, but rather an Irish-Italian living in the tiny California town of Friant (in Fresno County, 519 people). Nino Moschella does his own vocals, plays his own instruments, and knows how to get seriously funky. He’s channeling the sounds of Prince, Sly Stone, and Stevie Wonder. I’m just digging into his album now, but find myself stuck on this track here.

Funky beats, layers of Prince-like vocals, cool synths and handclaps. Yeah, this one’s for me. Thank you World Cafe.

Whaddya think, is someone beating Prince at his own game here? Isn’t this the kind of quirky, wildly original and FUNKY song that’s gone missing from the little man’s repertoire of late? Keep it comin’ Nino. If you come to Arizona, I’ll be there.

Nino Moschella: Are You For Real (mp3) – from the May 2006 Ubiquity Records release, ‘The Fix’. Pick it up on the label’s site, eMusic, or iTunes.

Another mp3 download, “Moved On”, is available here on Nino’s site.