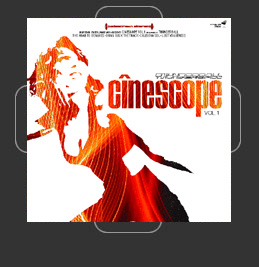 Looking ahead to October’s releases, ESL Music (Thievery Corporation’s label) will be releasing Thunderball’s latest, Cinescope. Washington DC’s Sid Barcelona and Steve Raskin are the force behind Thunderball. They excel at drum and bass, breakbeats, dub, and downtempo – all with a classic 70’s cinematic feel behind it.

They recruited Afrikaa Bambaataa for a couple of tracks, and Roots for another, so the boys have their connections. They spend their time performing DJ sets at various clubs, and also have a 8-piece band they pull together from time to time.

If you’re like me, once in a while you like to mix it up a little. This album puts that different little spin on things. Some tracks, you feel like you’re inside a blaxploitation film, others, you’re envisioning sexy young vixens dancing around you in a red, velvety, smoky lounge (like “Chicachiquita” below). Well, I guess I try to picture that with anything I listen to. * Excuse me, what’s that honey?? Haha! You know I’m only kidding! Okay, I’ll rephrase!! Jeez…. Ahem… right, so songs like “Chicachiquita” will elicit thoughts of your husband or wife or significant other dancing seductively around you in a red velvety lounge.

A Closer Look at Nino