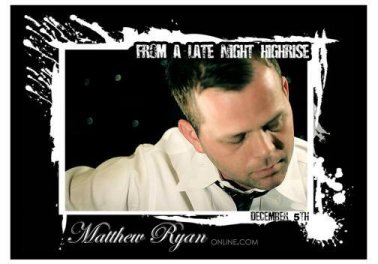 Many who check in here from time to time most likely share a lot of my tastes in music. A time or two, I’ve passed along a few of my favorites from Matthew Ryan, both as a solo artist, and as a member of the short lived but very impressive Strays Don’t Sleep.

I’ve devoured everything Matthew has released like that Japanese guy at the Nathan’s 4th of July hot dog eating contest at Coney Island (yeah, I need to work on my analogies). You know who I’m talking about, right? 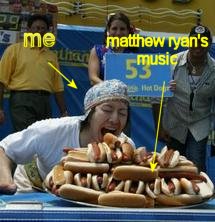 His name is Takeru Kobayashi. I looked it up. The fella knows how to eat hot dogs.

Matt is poised to release his next album on December 5th, the introspective From a Late Night High Rise.

There’s a cool timeline page on Matt’s web site, where he takes you through his career, year by year. His 2006 entry says this about the album:

Yes, the man has a way with words, and putting them to music. Take a listen to the great first single off the album. Then mark December 5th on your calendars and pick up a copy of From a Late Night High Rise (don’t worry, I’ll remind you). If you’re in the eastern half of the U.S., check out the tour dates below, and go check him out live. If you’re in the western half, don’t lose hope, because dates out west are being booked as we speak for early next year, including right here in Phoenix. I’ll finally get to see ol’ Matt live.

Matthew Ryan: Never Look Back (mp3) – from the forthcoming release, From a Late Night High Rise, out December 5th.

Other MR Albums you should check out:
May Day
East Autumn Grin
Concussion
Regret Over the Wires
Strays Don’t Sleep

Back to the Roots: James Brown Live

A Goldmine of Bruce Oslo Goodness