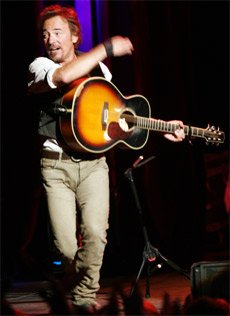 First off, a very cool video interview / press conference of Bruce before the Oslo show can be found here. The quality of the video itself is amazing, IF you have some patience. The Norwegian server that’s hosting it is probably getting slammed, and maybe it’ll get better. But some … patience … is … required.

And look what happened on the road to Oslo…

Oslo – A truck laden with equipment for a concert being given by US rock musician Bruce Springsteen blocked the Sweden-Norway border crossing at Svinesund for several hours Sunday. The driver was slightly hurt after he skidded on the icy road, rammed a railing and was left with the trucked slewed side-on to the traffic, blocking it, the NTB news agency said.

The contents were undamaged, meaning the Oslo concert could go ahead later as scheduled.

And go on it did!

Atlantic City
John Henry
Ol’ Dan Tucker
Further On Up the Road
Jesse James
O Mary Don’t You Weep
Love of the Common People
Growin’ Up
Erie Canal
My Oklahoma Home
The River
Mrs. McGrath
How Can A Poor Man Stand Such Times and Live?
Jacob’s Ladder
Long Time Comin’
Open All Night
Pay Me My Money Down

Encore:
Fire
Land of Hope & Dreams
You Can Look (But You Better Not Touch)
When the Saints Go Marching In
This Little Light of Mine
American Land