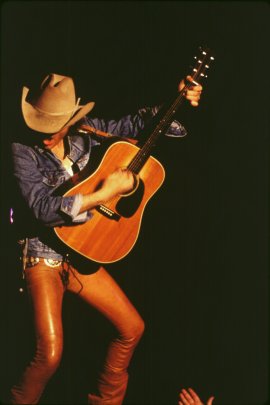 My appreciation for country music has always lied squarely outside of the Nashville mainstream country machine. I’ll take the old school country any day of the week: the Willies, Waylons, and Johnny Cashes. But the manufactured new school of country will never interest me. Not to knock ’em, but I don’t see myself ever getting into Toby Keith, Rascall Flatts, Brad Paisley, or for crikey’s sake, Carrie Underwood (TM). Now I see another American Idol princess of the ditzballs, Kelly Pickler (TM), has a debut album. And what is a Dierks Bentley?? (To be fair, if anyone wants to recommend the best of the New Nashville in the comments, feel free). It’s just that anything that makes me think of George W. Bush and red staters just makes me, well, not listen (and I live smack dab in the middle of a red state – egads, they’re everywhere!).

One of the artists I’ve always admired, and who has always stuck to his independent, honky tonkin’ ways is Dwight Yoakam. In my late teen years, between 1986 and 1990, he released these great four albums: Guitars, Cadillacs, Etc. Etc., Hillbilly Deluxe, Buenas Noches from a Lonely Room, and my favorite, If There Was a Way (mostly due to the title track and “Turn it On, Turn it Up, Turn Me Loose”). All fantastic albums, all dabbling in traditional country, western swing, and good ol’ hillbilly honky-tonk music.

Well now Rhino, yes Rhino again, has released a special 20th Anniversary deluxe edition of Guitars, Cadillacs, Etc. Etc. 2 discs of music containing early demos from 1981, a remastered album, and an entire live 1986 show from the Roxy in Hollywood. Yep, Dwight is so far outside the Nashville mainstream that he’s called Los Angeles home since 1977 (he turned 50 on Oct. 23rd).

I listened to the live show tonight. Dwight Yoakam live and loose on the Sunset Strip, playing to the likes of John Fogerty and Emmylou Harris. Belting out his early hits (“Guitars, Cadillacs”, “I’ll Be Gone”) as well as some classics (Bill Monroe’s “Rocky Road Blues”, “Mystery Train”, Hank Williams’ “My Bucket’s Got a Hole in It”).

So definitely folks, the Ickmusic Seal of Approval is dipped into a tub of moonshine and *dinggg* firmly adhered to this CD (and all D.Y. albums for that matter). 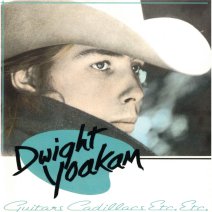 A Goldmine of Bruce Oslo Goodness

Beck on SNL: Gettin Funky at the Dinner Table