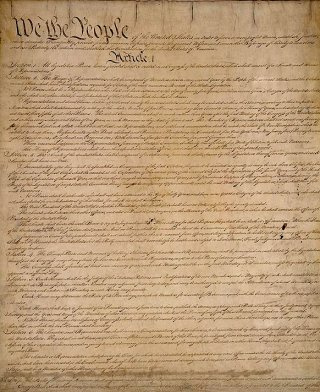 Tuesday, November 7th is Election Day in this U.S. of A. I will be hitting the polls first thing Tuesday morning, and for what it’s worth, I encourage all of you American readers to do the same. Get out and vote, people!

I try to keep to music 99% of the time, but given the times we live in, it’s impossible for me to not say anything.

I keep hearing that tomorrow is a referendum on George W. Bush and the war in Iraq. Well no kidding. I thought the 2004 election was the same, but the very slight majority of my countrymen and women were scared into decided to re-elect GW, and to keep the Republicans in control of Congress. I still marvel at how people can listen to and watch our president and be swayed or impressed by him. It’s really beyond me. Many feel different, and that’s fine. I just don’t get it, that’s all.

What’s even more stupefying to me is how people allow Bush and his puppeteers to manipulate them with fear. To listen to them tell us how they are the party that keeps us safe, while at the same time they strip us of our civil liberties (habeus corpus, bah, who needs it?), and foment the situation in Iraq by “staying the course”. God bless the brave troops who have been killed, maimed, and who put themselves in harm’s way every day, all for the tragically misguided policies of this current administration.

I encourage you to read Thomas Friedman’s recent New York Times op-ed. In part, it says:

What could possibly be more injurious and insulting to the U.S. military than to send it into combat in Iraq without enough men — to launch an invasion of a foreign country not by the Powell Doctrine of overwhelming force, but by the Rumsfeld Doctrine of just enough troops to lose? What could be a bigger insult than that?

What could possibly be more injurious and insulting to our men and women in uniform than sending them off to war without the proper equipment, so that some soldiers in the field were left to buy their own body armor and to retrofit their own jeeps with scrap metal so that roadside bombs in Iraq would only maim them for life and not kill them? And what could be more injurious and insulting than Don Rumsfeld’s response to criticism that he sent our troops off in haste and unprepared: Hey, you go to war with the army you’ve got — get over it.

The pollsters say the Democrats are in pretty good shape going into tomorrow. There may be a Democrat majority in Congress for the first time since the GOP took control in 1994. There could be hearings on Iraq. Imagine, this administration could actually be held accountable. They’re certainly not going to own up to any failures themselves. Bush, Rummy, or Cheney admitting mistakes? Please.

So make your voice heard, America, whatever your beliefs and political leanings. Yes, I am hoping more Americans feel the way I do (for the first time in 10 years). I am hoping we all collectively wake up, and get on the road to taking our country back. Bush and company think we’re stupid, folks. Let’s show them finally that we’re not.

That concludes my Political Opinion Section.

Blaze Foley: Election Day (mp3) – from Live at the Austin Outhouse, available on Amazon and iTunes.

Beck on SNL: Gettin Funky at the Dinner Table