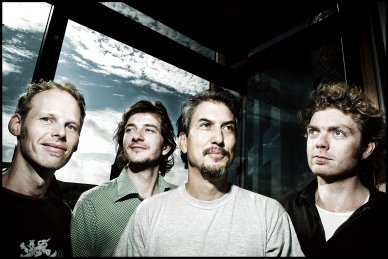 Well I’ve been lax in my posting output lately and it’s not for lack of things to post about, because lordy knows I have all sorts of cool stuff on tap for you people. It’s just that this day job / family thing sometimes takes up a lot of my time and – well – leaves me pretty pooped by the end of a working day. Blah blah bluh-blobbly-blah. On with the music.

A friend at work – I’ll call him Jeff, because that’s what his name is – loaned me this CD a few months ago. Yes, a few months ago. It’s a 1993 benefit CD for Victoria Williams, called Sweet Relief – A Benefit for Victoria Williams. She’s one of those artists I’ve heard of, but never heard. Well I finally popped in the CD, and quite liked a lot of the tracks: Soul Asylum’s version of “Summer of Drugs”, Michael Penn’s “Weeds”, “Lights” by the Jayhawks, and especially the track I have for you tonight, courtesy of Giant Sand. The vibe seemed familiar as I was listening, and my questions were answered when I discovered that John Convertino and Joey Burns were with this band before they went off and formed Calexico.

Tucson, Arizona based Giant Sand’s frontman is Howe Gelb, who also has side projects like Arizona Amp And Alternator and The Band of Blacky Ranchette. Coming through Giant Sand at one time or another has been Juliana Hatfield, PJ Harvey, Neko Case, and yes, Victoria Williams too.

The benefit CD was put together due to Victoria’s battle with MS. She is still going strong today. She has two projects: Original Harmony Ridge Creekdippers with her ex-husband Mark Olson (former Jayhawk), and the Thiftstore Allstars.

This tune instantly connected with me. Give me a good intro into a cool driving rhythm, with unique lyrics (“three frogs by the side of the road: smart, smarter and smartest…”), and you’ve fished me in.

THIS I GOTTA HEAR: Christina Aguilera joined the Rolling Stones to sing “Live with Me” at their Beacon Theater gigs a couple weeks back. If anyone can help me track it down, I would really like to hear it.

The Fearlessness of Fela Kuti