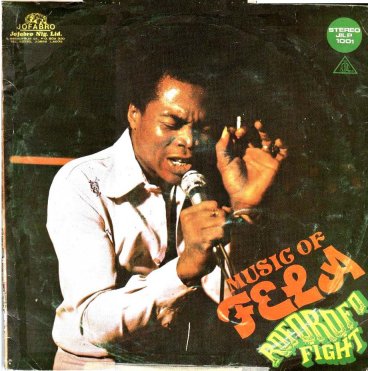 It’s nearly impossible to sum up Fela Anikulapo Kuti in one post. But to put his popularity and impact into perspective, over a million people poured into the streets of Lagos, Nigeria when he passed away in 1997.

Fela is credited as one of the pioneers of Afrobeat, which is a cocktail of African highlife, jazz, funk, and more traditional African chanting. He performed most of his career with two bands behind him: Afrika 70 in the 1970’s, and Egypt 80 in the 1980’s. Few of his songs clocked in under the 10 minute mark, and a good number of them extend into 20 and 30 minute territory.

The reason for his popularity stemmed from his very open disdain toward the government and police of his home country of Nigeria. His music often directly criticized the corruption and illegal practices of the government. As a result, he spent much of his time enduring jail time, and police raids on his nightclubs and commune. In fact, in 1977, a police raid on his commune, called Kalakuta Republic, resulted in Fela being severely beaten, the commune being burned to the ground, and even his elderly mother being thrown from a window. His studio was completely destroyed, along with most of his instruments and master tapes. Not a fun time in Lagos. 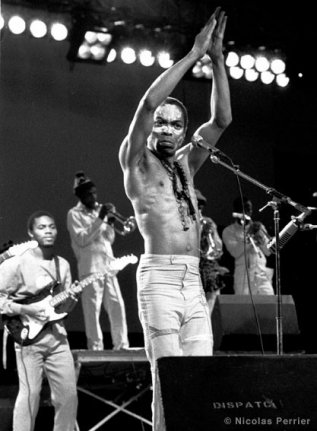 One year later, to mark the anniversary of the destruction of Kalakuta Republic, he married 27 women. No, that’s not a typo. The man married 27 women! Many of them were his backup dancers and singers. All the birthdays and anniversaries, good God! My head would explode. As would other parts of the anatomy, but I won’t go there.

Fela continued to record and perform up until the early 90’s, where it was apparent to many that he was sick. In 1997, he died from AIDS-related heart failure at the age of 58.

His body of work and legacy remains, and I encourage folks to find out more about the man, and to listen to his music. He was a hero, fearless in standing up to the forces of evil in his country.

Here’s the first tune I ever heard by Fela when I discovered his music in the late 90’s.

I watched the last part of a Fela documentary on Sundance Channel earlier tonight. I just did a Youtube search on Fela, and the first one that came up was a short clip from the same documentary. Here it is.

A cool bio in the Guardian (UK), including an interesting anecdote about Fela’s Lagos run-in with Paul McCartney.