Happy New Year all. I’m back from a long weekend getaway in New Orleans for my brother in law’s wedding. That’s my big head up there covering up Andrew Jackson and most of St. Louis Cathedral. It was also four (4!!) full days without a computer. There was a laptop available, but my wife challenged me, so I stayed away. Yes, my name is Pete, and I am a computer addict. (“Hello Pete”).

Anyway, on to the subject at hand: New Orleans, Louisiana.

This was my first visit. New Orleans had always been at the top of my list of places I needed to visit. Now I can cross it off the list. But don’t think I’m satisfied. New Orleans is a place that teases you when you leave, making you itch for more. And I want more, especially since I didn’t get to visit any of the great music meccas of the city, like Tipitina’s or the Maple Leaf Bar. It was a family wedding weekend, so that took priority. But I did manage to get away for a few outings.

Here are some of the things I did…. 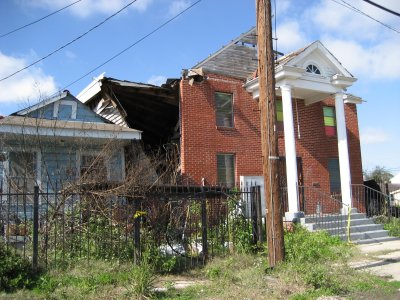 I woke up early Saturday morning and drove down to Toulouse Street & the Mississippi River to embark on a 3-hour bus ride around the areas of New Orleans most affected by the aftermath of Hurricane Katrina. We drove through downtown, Lakeview, New Orleans East, St. Bernard Parish, and the Lower and Upper Ninth Ward. It’s sort of hard to describe the emotions you experience when witnessing these areas first-hand. There shock, there’s sadness, there’s outrage, but also a bit of hope.

The tour guide and the driver (Pat and Diane, respectively), who both were displaced by Katrina, mentioned that they’ve been doing the tour for about a year now, and they’re finally starting to see some positive signs. One of them is the presence of more and more FEMA trailers outside of the damaged or destroyed homes, which means people are returning to New Orleans to rebuild their homes.

What you see is wide swaths of the city that are for the most part abandoned, save for the people who have chosen to return to their neighborhoods. They’re virtual ghost towns. Empty homes, schools, churches, shops, malls… all at different levels of damage and decay (some just empty lots where the buildings have already been demolished).

Most of them have the markings of the rescue and recovery teams, showing the date visited, the state the team was from, and the number of people found, if any. Yeah, it’s pretty depressing, but important to see. It’s still maddening when you dwell on the details of the disaster – the fact that human beings, citizens of the United States of America, were left to wait in the sweltering heat without food and water for days – on freeway overpasses, on rooftops, in attics, at the Superdome – all just waiting for help.

One bright moment on the tour was a visit to Musician’s Village, a Habitat for Humanity project spearheaded by Harry Connick, Jr. and Branford Marsalis. Built on 8 acres land in the Upper Ninth Ward, Musician’s Village will consist of housing for the area’s musicians affected by Katrina, all built around the Ellis Marsalis Center for Music. A handful of homes have been built already. Here’s a pic from the bus. Notice the cool Easter egg colors of the homes….

Across the street, volunteers for Habitat for Humanity hammered away on one of the new houses… 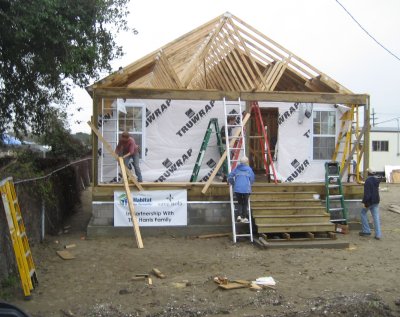 It was really cool to see. Read more about Musician’s Village here and here.

The tour operators said that Gray Line’s business has been severely affected by Katrina (about 40% of what it was pre-Katrina), so if you’re going to be in New Orleans, do yourself a favor and take one of their tours, whether it’s the Katrina tour, a cemetery tour, a plantation tour, or whatever. It’s a great alternate way to see the sights of the city.

A couple days later I drove the family through the Ninth Ward, and passed by the home of Fats Domino. On September 1st, Fats was rescued from the rooftop of this home (I am assuming this is his home, as well as the office for Fats Domino Publishing – one of you NOLA residents can confirm or correct)… 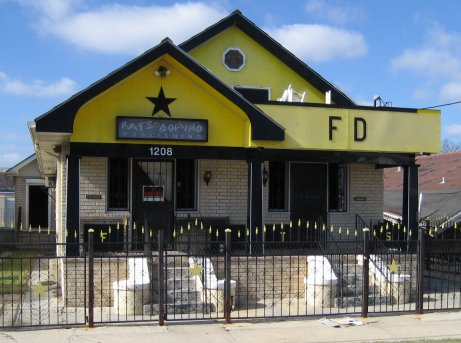 An Outing on Bourbon Street: the first night I was there, my brother in law and I headed from his home in New Orleans East to the French Quarter for a walk down Bourbon Street. Our butts hit the barstool at The Old Absinthe House, a 200 year old bar on the corner of Rue Bourbon and Rue Bienville. The bartender was cute & friendly, and sounded a lot like Jaime Pressly (whom she had never heard of). After a glass of Abita Beer, we filled up a plastic cup with another and walked Rue Bourbon. It was a Thursday night, so there was pretty mild behavior altogether. We saw a lot of people taking pictures with cops. We stopped into a few bars here and there, listened to some live music, people watched, and ended up back at the Absinthe House for the rest of the evening. I told the bartender that we had a ho-hum time, and she told me that next time, I need to make my way over to Frenchmen Street, where the locals go. So next time, it’s Frenchmen Street. Snug Harbor is on my list too, and it’s also on Frenchmen Street.

Beignets at the Cafe du Monde: 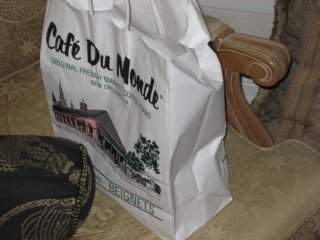 Beignets are delicious pieces of fried dough (fritters) bathed in a bag of powdered sugar. The Cafe du Monde has been serving ’em up since 1862. I picked up a bag of a dozen to take back to the family. I’m pretty sure I ended up eating 10. Heaven on earth, these beignets.

Lousiana Music Factory: Across from the House of Blues on Decatur (down in the French Quarter) sits a great regional music shop called the Louisiana Music Factory. I didn’t get to spend nearly enough time in the place, but managed to pick up some quality Zydeco selections, some of which I have for you below).

In my short time there, I felt the spirit of New Orleans. Walking the same streets of the Vieux Carre that people have been walking since 1718, driving through the sections of New Orleans devastated by the aftermath of Hurricane Katrina, watching the ships and barges ride the mighty Mississippi, there’s a vibrancy and spirit to the city that still remains. Yes, there’s plenty of work to be done. The residents of the Crescent City (and the whole Gulf Coast, for that matter) have their work cut out for them. And it is up to the rest of us to support them in any way we can.

A great way to support this wonderful city is to visit. Walk the streets, eat the food, listen to the music, soak up the multi-culture. The fact that you’re reading this site makes you a prime candidate for a visit to New Orleans: you’re a music lover. New Orleans is music. Come on down to the birthplace of jazz. How about Jazz & Heritage Festival at the end of April? Plan a visit!

I was only there for a few days, and am disappointed that I didn’t get to experience a lot of the things I know I should. So there will be future trips. I will sit in Tipitina’s and catch a live show, I will walk Frenchmen Street, I will visit both of Larry Flynt’s Hustler Clubs on Bourbon Street (just wanted to make sure you were still paying attention).

New Orleans, thank you, and I’ll be back. Join me, won’t you?

Donate to Habitat for Humanity’s Musician’s Village (link is from this page).