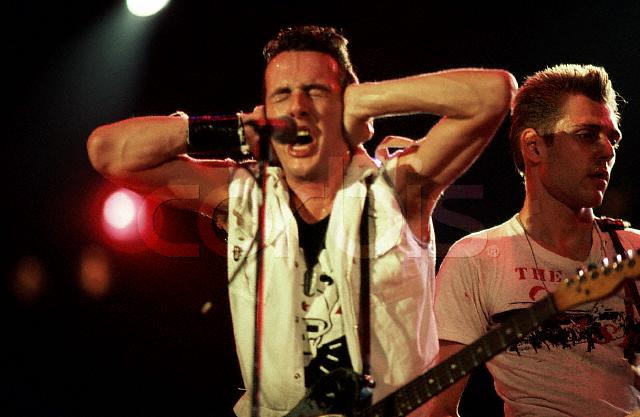 Joe Strummer was not happy when he hit the stage at the US Festival in 1983. There’s different stories about what was pissing him off so much. But the gist of it was that the Clash were upset when they heard that Van Halen took a million dollars to headline the third and final night of the festival. The Clash, by contrast, refused to go on stage until US Festival organizer Steve Wozniak (of Apple Computer) agreed to donate a large sum of money to charity. There was even a backstage shouting match between Joe Strummer and David Lee Roth, if you can believe that. Oh to be a fly on the wall on that day.

Well, what resulted was a very spirited set, with Joe Strummer taking some time between songs to rant and rave against consumerism and the American way. This is also guitarist Mick Jones’ last performance with the Clash.

* The only imperfection of this show is that “London Calling” cuts out about half way through and jumps about halfway into “This is Radio Clash”. Don’t worry, you’ll get over it quickly.

London Calling / This Is Radio Clash
Somebody Got Murdered
Rock the Casbah
The Guns Of Brixton
Know Your Rights
Koka Kola
Hate and War
Armagideon Time
Sound of the Sinners
Safe European Home
Police on My Back
Brand New Cadillac
I Fought the Law
I’m So Bored with the USA
Train In Vain
The Magnificent Seven
Straight to Hell
Should I Stay or Should I Go?
Clampdown

When the Saints Go Marching In