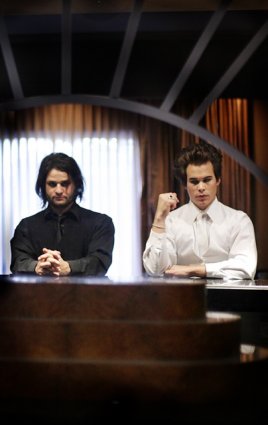 Luke Steele. If that isn’t a name destined for show biz, I don’t know what is. Luke is the main man in The Sleepy Jackson from Perth, Australia, one of the most isolated big cities on God’s green earth (The most, maybe?). He’s a man of many instruments influenced by George Harrison, Walt Disney, and Woody Guthrie. Since ’99, he has released two full albums, 2006’s Personality (One Was a Spider, One Was a Bird), and 2003’s Lovers, which this song comes from.

The Sleepy Jackson: Rain Falls for Wind (mp3) – from Lovers.

Site Note: So I just added this feature that allows people to see a preview of a web site just by hovering your mouse over a link. Pretty cool in my opinion. I showed my buddy Jim at work, and he looked at me like I was crazy, and said, “Dude, uh, Safari 2.0?!!”. I guess Safari on Macintosh has this as an option in their browser. Mac snob.

But anyways, I think it’s cool. What do you think? Your results will determine whether it stays or goes. Does it annoy the crap out of you? Or are you okay with it? Do tell. No comments mean you indeed do not give 2 shits either way, and I’m OK with that.

Selections from the Mansion of Fun