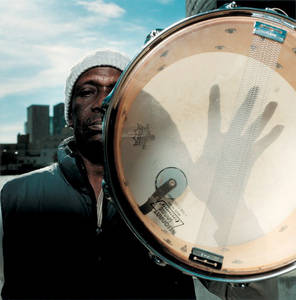 Kudos to Jefito for throwing a Fela Kuti / Ginger Baker tune on one of his Friday mix tapes a couple months back. It made me aware of Fela and the Africa 70’s “Live” album with Ginger Baker. It was originally released in 1971, but was reissued late last year with a 16 minute bonus track – a Ginger Baker / Tony Allen drum jam.

Tony Allen was Fela Kuti’s drummer for many many years, and is active today in The Good, the Bad, & the Queen, which also features former Blur frontman Damon Albarn, and former Clash – yes CLASH – bassist Paul Simonon. Hidden Track caught one of their shows over the weekend, and has some sweet pics posted in their photo review.

So I’m a percussion kind of guy, and can happily spend 16 minutes of my life listening to a fine Afrobeat / funkin’ drummin’ jam. Can you?