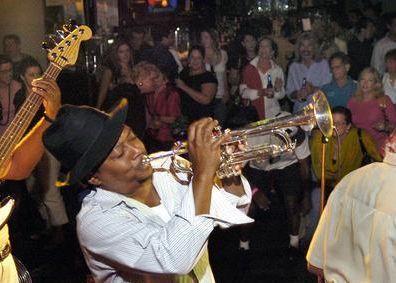 A fixture in the New Orleans music scene, both pre and post-Katrina, is Kermit Ruffins. Every Thursday night, a club in the Bywater section of town – Vaughan’s – becomes Kermit’s place. The fact of the matter is that every Thursday, Kermit cooks. And I’m speaking literally and figuratively. Sure, Kermit cooks on stage with his band, the Barbecue Swingers. But when he’s not on stage, Kermit’s cooking outside – off the back of his red pickup truck. He sets up his barbecue, and grills it up for anyone who’s hungry. How cool is that?

Kermit Ruffins is a trumpet player, and started off as an original member of the Rebirth Brass Band. He and his high school buddy Phillip Frazier co-founded the group in 1982. Ten years later, he formed the Barbecue Swingers. Not surprisingly, Kermit’s biggest influence is another pretty decent New Orleans trumpet player: Louis Armstrong.

A few weeks ago, a reader friend of mine, Cove, was nice enough to have Kermit sign his new CD for me at one of his Vaughan’s gigs. Many thanks, Cove. I’ll be back to the Big Easy for next year’s Jazz Fest, God willing, and you will certainly be seeing me scarfing down some quality Kermit Ruffins barbecue outside of Vaughan’s on a Thursday night!

Kermit’s new CD, Live at Vaughan’s, comes highly recommended. It’s bursting at the seams with that New Orleans flavor: the great music, the rich atmosphere, the boisterousness. Support Kermit and pick one up today…

BUY his new CD, Live at Vaughan’s: on Amazon

| at the Louisiana Music Factory | on iTunes 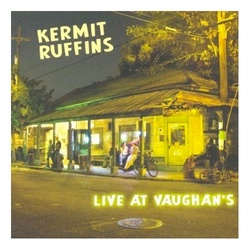