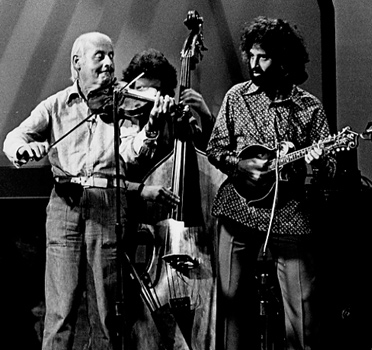 Speaking of violins, you can’t mention the instrument and the 20th Century in the same sentence without talking about Stéphane Grappelli. Mr. Grappelli, together with jazz guitar legend Django Reinhardt, founded the Quintette du Hot Club de France, the single hottest and most influential European jazz band of the first half of the 1900’s. They played their style of gypsy string jazz between 1933 and 1939, when World War II forced the group to hang it up.

Grappelli stayed very active in music for the rest of his long life (he died in 1997 at the age of 89). He played with many musicians spanning across many genres of music; artists like Jean-Luc Ponty, Oscar Peterson, Yo-Yo Ma, and mandolin player David Grisman.

This brings us to 1978. Grappelli was in San Francisco playing the Great American Music Hall. He and his group showcased Grappelli’s unique style, ripping through many old standards and classics. And joining him for the last few tunes were bluegrass-ers David Grisman and guitarist Tony Rice. Nice show, great sound, and a nice introduction to Stéphane Grappelli.

Check out Stéphane Grappelli’s music on

or the Amazon links below…