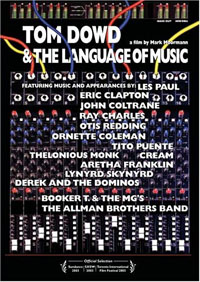 About a month after I started this blog, my then-boss recommended the documentary Tom Dowd and the Language of Music. Two and a half years later, I finally took his advice (thanks to my new subscription to Netflix).

Tom Dowd (1925-2002) was a legendary engineer and producer for Atlantic Records, and worked with some of the greats in recorded music. Let’s name a few: Eric Clapton (Cream / Derek and the Dominos), the Allman Brothers, Otis Redding, Aretha Franklin, Ray Charles, Led Zeppelin, Charlie Parker, Dizzy Gillespie, John Coltrane, the Drifters, and countless others.

The documentary follows his life, in Dowd’s own words, from his work as a nuclear physicist on the Manhattan Project (while he was a teenager!), to his emergence as a technical (not to mention musical) genius in the studio.

By the end of the film, you’ll be blown away by his warm and personable character, the childlike enthusiasm he has for music, and the love and respect that some of the biggest names in music have for him.

The end of the film shows him late in life, in front of the console at Criteria Studios in Miami, playing around with the mix for “Layla”, which he produced for Derek and the Dominos. He isolates the guitar parts played by Eric Clapton and Duane Allman (whom he introduced), fools around with the levels, and is like a kid in a candy store.

If you have a Netflix account, put this one at the top of your queue now, or buy it below. As a music lover, this one will affect you.

Buy The Language of Music

Check out the staggering list of Tom Dowd’s production and engineering credits on AllMusic.

View the trailer here, from the film’s official site:

Dowd was the recording engineer for Aretha Franklin’s “Respect”. But he was also the engineer when Otis Redding recorded it a couple years earlier than Aretha. Here it is…

What the Kids are Listening To: Fergie