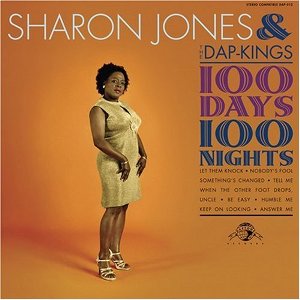 100 Days, 100 Nights by Sharon Jones & The Dap-Kings could very well have been recorded and released in 1965. This record absolutely drips in the southern fried soul of the ‘good ol’ days’, though this record will undoubtedly (albeit criminally) be compared to more recent outings from Amy Winehouse. The fact that these ladies share a backing band is where that comparison should end. Where Amy is a profitable facsimile of soul, Sharon is soul, pure and simple. Hell, even their record label is kickin’ it old-school and releasing 7” singles and refers to their roster as a “stable”.

The lead off track “100 Days, 100 Nights” finds Sharon in full-on vamp mode bemoaning the whereabouts of her man. And when she slows it down to a bluesy half time bridge you feel it. Elsewhere on the record you can find Sharon echoing Aretha (“Nobody’s Baby”), Otis (“Humble Me”, “Tell Me”) and Carla Thomas (“When The Other Foot Drops, Uncle”). And it needs to be said that The Dap-Kings stand as a modern day equivalent to Booker T. & the M.G.’s or The JB’s. The full record does not drop until the end of the month, but here’s one to tide ya’ll over.

Amy Winehouse steps out at the Mercury Awards