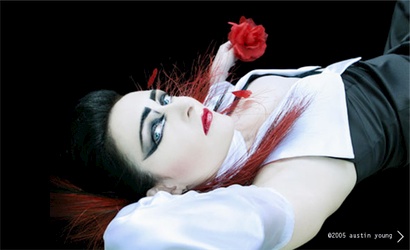 For established artists, putting out new music is always a risky venture. Of course, it’s equally risky for the fan. More often than not, the result is disappointment. Recent disappointments for me include The Stooges’ Wierdness and Debbie Harry’s Necessary Evil. However, occasionally the artist in question pulls it off. The most recent example that comes to mind is last year’s New York Dolls disc, Someday it Will Please Us to Remember Even This. So it was with hesitation that I spun Siouxsie Sioux’s new album, Mantaray.

I should preface this by saying that I only discovered Siouxsie and the Banshees a little over a year ago. I can’t claim to be a seasoned fan. In addition, I haven’t heard much of her previous project, The Creatures. Furthermore, this is the first solo disc Siouxsie’s ever recorded.

I’m pleased to report that the album is surprisingly good. Of course, you have to accept that it isn’t going to blow your mind in the way the Banshees’ early work might. Nevertheless, Siouxsie’s voice is incredibly intact, the songs are both competent and enjoyable, and the album as a whole is well produced. Fans of the Banshees’ work should be pleased with Mantaray. I’m not sure that it will produce any new fans, but rarely do such establish artists accomplish that feat with new work. It’s a strong solo effort, and definitely worth picking up.

Here is the video for the single, “Into a Swan.”

Mantaray streets 10/2 in the US (already available in the UK).