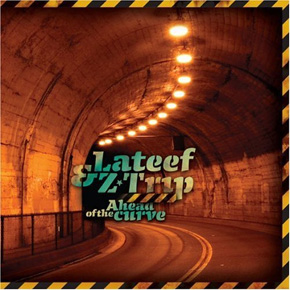 A mainstay on my iPod for the last several weeks has been Ahead of the Curve, a mix-tape by Lateef and DJ Z-Trip. I’m not too well versed in the current underground hip-hop / mix-tape scene, but let me tell you, this stuff is right up my alley. It’s probably due to the old school influence that pervades this album – er- mix tape.

Lateef the Truthspeaker is a west coast rapper originally from East Oakland, CA. His dad was a member of the Black Panthers, and his mom was also in the organization, as a medic (?). He was a founding member of a collective called Solesides, and has worked with Fatboy Slim and DJ Shadow, among many others.

Z-Trip comes from my neck of the woods – Phoenix, Arizona. He’s out of L.A. now, and is a member of a collective called the Bombshelter DJ’s, which also features DJ’s Emile and Radar. He’s featured in a 2001 DJ documentary called Scratch.

I’ll definitely be jumping into more of their music, and into the scene in general. As one who was disillusioned by mainstream hip hop in the mid-late 90’s, little did I know that all I needed to do was dig a few feet under ground. Shame on me.

This one is the third track, dedicated to and featuring Z-Trip, another funky Caucasian from Arizona. At times, it sounds like a classic Bomb Squad production, with Public Enemy’s Terminator X on the wheels of steel. But nope, it’s 2007. It’s Z-Trip. It’s Lateef. It’s – what are the kids saying these days – dope / tight / off the chizzle.

BUY Ahead of the Curve.