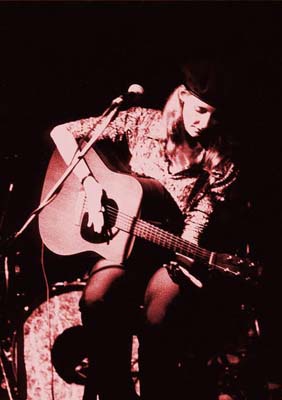 Kim Jarrett writes excellent songs that showcase her outstanding voice. There’s nothing fancy or pretentious about the songs, or the voice, or Kim herself.

Kim received critical acclaim for her self-titled debut album. She still receives accolades for many of the tracks, in particular the opening number, “How Long”, as it comes pre-loaded on an mp3 player sold worldwide. This is an indication of Kim’s great universal appeal.

Thinking of You (2007) primarily features Kim on guitar/vocals and Mike on bass and backing vocals. The sound has been stripped down in comparison to the debut album, and I think it works extremely well with the songs that have been chosen. Guest appearances have been limited to a couple of ace guitarists: Tim Bovaconti (Ron Sexmith) contributes stellar electric guitar and pedal steel on many tracks, and Eric St-Laurent’s electric sounds great on two others.

Kim (and Mike) can reliably be found hosting an open mic night every Tuesday at the Liberty Bistro in Toronto. You never know who will show up to perform and listen to the varied performers!

Buy Thinking of You and check in at Kim’s web site (http://www.kimjarrett.com/). If you want to hear more, a few more new tunes (including Hypnotizing, possibly the catchiest on the album) are on her MySpace page.

The Bird and the Bee