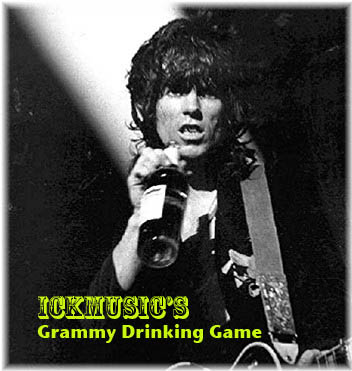 As the shadow of Amy Winehouse’s brunette beehive casts a shadow on the 2008 Grammy Awards – it is time, friends, to open the refrigerator, fetch a cold Heineken Premium Lite, and drink my way through this ceremony. The official rules for Ickmusic’s Grammy Drinking Game can be found here.

Be with you in 20 minutes…… feel free to add your comments in the – well – Comments.

6:54pm – In the “I sh*t you not” department, here is proof positive that I am committed to this game. Represent!

6:59pm – the wife and kids are hunkered down upstairs. Wise of them! Here we go…
7:00 – Kind of cool, kind of creepy intro with Alicia Keys and a dead black & white Sinatra singing behind her piano. The way he’s snapping hisfingers behind the piano looks a bit like he’s handling his junk. But I digress.
Michael’s IM: Hey, it’s Frank Sinatra… here’s the sound of teenagers all over the country going “who the hell is that guy?”
Okay, these ‘virtual’ performances are creepy as hell. Alicia Keys sounds great and honestly it was a great performance. But what the heck is with all these women with dresses that they look like they are going to trip on. I’m thinking that before the end of the night we’ll see at least one of these ladies eat a chunk of the stage!
7:03pm – Alicia is beautiful. But that green dress is smashing her girls.
7:05pm – Carrie Underwood performance. Is anyone else having flashbacks to Shania Twain? Leatherrrr… In the background, dancers are bashing those swimming pool noodle things into junk.
Michael: They are wasting no time… Carrie Underwear, I mean Underwood is doing a vamped up, rocked out “Before He Cheats”. I guess the cast of “Stomp” was available for the evening. She definitely gets points for the Dusty Springfield inspired look.
7:07pm – Oh! American Idol (Underwood) sighting! 1 Drink!
7:08pm – There’s the Purple man. Eh, 2 drinks! Prince presents Best Female R&B Performance. Alicia Keys wins. I didn’t catch P’s one liner about Sinatra. Drink.
Michael: Dayum… looking every bit the part of Christopher Tracy Prince is here to give the award for Best Female R&B Vocal Performance. First award goes to Alicia Keys for “No One” and obviously she thanks God and her “Angels” (Prince has a copy of ‘The Watchtower’ in his back pocket to hand her).
7:11pm – first commercials 11 minutes into the ceremony. not surprised I guess.

7:17pm – “Jungle Love”! Driiink. Okay, we have Morris, Jerome, Jimmy, Terry… is that Jesse on the flying V?
Michael: Jimmy Jam! Morris! Jerome! It’s the motherf**king TIME!! Somebody get me a mirror! I don’t know… is this show is certainly not letting up on the pace. Jungle Love… oh-eh-oh-eh-oh! Ella-ella-aye-aye… Rihanna flows nicely. And when did Morris start looking just like Prince?

7:22pm -Tom Hanks showing love to the Band! Nice. Tom Hanks = Grammy Gold. Eh? But “That Thing You Do” (I think was the name of the movie) was pretty sweet.
Michael: Hey Tom Hanks thanks for pointing out The Band are Canadian.

7:26pm – “A Day in the Life” with Cirque du Soleil (sp?) – a walking umbrella. WOman. Red Dress. Flailing around on ropes. “That girl is doing an acrobat”, my 4 year old mentions.
Michael: And now for the yearly butt kissing of The Beatles, watch closely Justin Timberlake because you know The Beatles were the first boy-band.
Okay, Cirque du Soleil is cool and all, but why do they get a longer performance than the previous two?

7:31pm – Michael: All together now… “Who’s this kid?” Ah, must be from “Across the Universe”. I’ll admit, I’m sold and will buy the record tomorrow. That was some goosebump inducing gospel.

7:33pm – A Jeff Tweedy sighting in the audience! I’ll drink to that… (Sky Blue Sky is up for Rock Album of the Year)
7:34pm – Amy Winehouse’s first victory of the telecast. I’ll sip to that too.

Kudos to the wife for busting out the sushi. It complements Heineken just fine thank you.

7:48pm – here goes. Kanye’s tribute to his mom.
Michael: I know Pete doesn’t love Kanye, but love him or hate him he’s entertaining as hell. Add Daft Punk and you’ve got something really amazing. Kanye’s performance of “Hey Mama” is nothing short of breathtaking.

7:51pm – Kanye. Really nice & touching performance.
7:52pm – Right into Fergie with John Legend. Ho hum after Kanye…
Michael: I don’t envy Fergie right now. How do you follow up that? Not a dry eye in the house.

7:55pm – Sir George Martin and Ringo hit the stage to accept a Grammy. Much respect. Drink.

8:03pm – Beyonce. Leeegs. Superficial? Yes. She rattles off legendary female singers. But all I hear are legs.

8:04pm – And here comes Tina Turner. Speaking of Legs of Yore.
Michael: I’m glad that Cher can joke about herself.
Beyonce is doing a tone poem. Interesting.
Wow… just wow. They need to bottle whatever Tina Turner does to stay looking so good and sell it. Beyonce just doesn’t have legs like Tina. And somebody get John Fogerty up there!!! And I hate to be the one to say it, but is it gonna get awkward when the “In Memory” package rolls and everyone cheers for Ike?

8:18pm commericals. Let’s all give it up to my cat Jéfe for accompanying me on this journey to Grammy Buzzland. 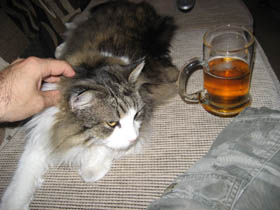 8:21pm – here go the Foo Fighters. Must take a look at Michael’s drinking rules. Grohl is spitting up a storm. Drink.
Michael: Jason Bateman introduces the Foo Fighters (did I mention that I get to see them in a week and two days?) and Pat Smear is back with the group. It’s nice to see him back in the fold. I’m just noticing that Taylor has ENORMOUS teeth. Must be a pre-requisite (Mr. Grohl has a huge set of choppers as well). And if you missed it that is at least 4 big drinks…

And beards. Long hair and beards.

8:26pm – Hot Asian violinist bows after the Foos / Orchestra performance. One last sip for her.

8:33pm – George is there to introduce Brad Paisley. Makes perfect sense… actually no. No it doesn’t.

8:34pm – Did Paisley just sing “I’d like to check you for ticks”??? Time to get another beer. What’s next? “I’d like to apply this ointment to your hemorhoiiid.”??
Michael: Brad Paisley is a hell of a guitar player but this song is lame. I’d like to hear him tear that pretty tele up.

8:37pm – Chris Brown’s and Akon’s first appearance is an hour and 37 minutes into the telecast? Bet they’re pissed.

8:38pm – Kanye wins. Hats off…
Michael: Lil’ Beyonce, Lil’ Chris and that idiot Akon.
Kanye West wins his third Grammy of the night. Can’t wait until Perez says it’s a sympathy win! Aww, Kanye is getting cut off… come on. He’s saying something about his Mom. And the producers listen. See, Kanye has some power.

8:40pm – They cut Kanye’s speech off with music. Drink! And he makes them turn it off. Nice!

8:42pm – Ludacris introduces Aretha Franklin and BeBe Wynans. I’ll never tire of hearing Aretha’s voice. No, I won’t offer the obligatory joke about her size. But that said, she has been bigger, hasn’t she?
Michael: BeBe and Aretha… Prince is leaving the building… it’s time to go to church!

8:56pm – Dierks Bentley and Carole King give it up for Earl Scruggs. Right into Feist.. Indie Hipsters peeing pants….cool looking stage set-up.
Michael: Time for the country awards! Ah, fake out… it’s Feist!
I don’t get Feist, kind of like I don’t get the whole thing with Juno. I mean it’s entertaining and good music, but I don’t get the hype.

9:00pm – Kid Rock and an older lady break into song after some very awkward banter. Who is she?
Michael: Kid Rock, really? And is that Dave Koz!! Jason Hare must be throwing things at his TV right now.

Foo Fighters? Come on MAN.
Michael: Idol Sighting! Oh shit! I’ll say that I’m shocked. I’m a huge Foo Fighters fan and that record did not deserve it. Regardless you can’t help but love Dave Grohl.

9:10pm – Stevie Wonder. My wife asks: “Who makes his clothes? Looks like he’s wearing a tent! – – Poor guy. He can’t see, and people just dress him up like they want to.”

9:13pm – Alicia Keys singing “No One”. I think I see her sing this song at least twice a week – whether it’s here, the Super Bowl, the Today Show… she’s everywhere.

Michael: Hey it’s Stevie Wonder. Is he gonna sing Barrack Obama’s name again?
Alicia is back to perform again and brought John Mayer with her… Funny, ya’ll remember when I posted that clip of him performing “No One”?

Thanks to his recent Mayercruise, I now think of this whenever I think of John Mayer. Not good. 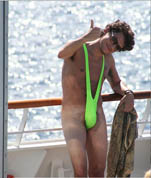 9:18pm – Vince Gill wins an award and proclaims: “I just got an award handed to me by Ringo Starr. Have you had that happen to you yet, Kanye?” – Laughter ensues. A drink to Vince!

Here comes Herbie Hancock and Lang Lang performing “Rhapsody in Blue” – one of the first CD’s I bought and would listen to incessantly while studying in college (hey, it did happen every once in a while!).

9:34 – Rihanna wins something. Nod. Drink.
Michael: Jay-Z is not getting any tonight.

“You Know I’m No Good” into “Rehab”. She mentiones her boy “Blake” in both songs. She’s obviously relying on her lyrics prompter. She looks a hell of a lot better than she did a couple of weeks ago. And her voice. Beautiful, soulful, and effortless.

Michael: Ah Amy… she’s sober and sounds great. Those aren’t the DT’s she just performs like that. Great performance, get well Amy, get well… It’s clear that Amy is pretty fragile and I’m glad to see her Father and Mother right there. I will say again get well Amy.

9:48pm – Natalie Cole and Tony Bennett give out Record of the Year. Amy Winehouse wins. Call me a sentimental knob, but I was touched by her reaction. Great acceptance speech! “To my Blake incarcerated!” Instant classic line!

10:00pm – It’s Memorium time….. always a tad depressing.
Michael: So many gone this year…Bocelli and Groban are together to honor The Maestro. I think Groban is a hack but Bocelli is as close to the real thing as I think that we’ll come in this generation.

A nice performance, but it made me sleepy. It’s nothing to do with the Heinekens, right?

10:25pm – Will.i.am raps about the Grammys. G to the R to the A to the M to the M to the Y. Meh.
Michael: Wil.I.Am can be annoying when out of the context of the Black Eyed Peas. This is no exception.

And they give it to Herbie Hancock. “That’s unbelievable, man.” says Quincy. Let’s see Kanye get up and interrupt Herbie here. I don’t think so… Props to Herbie – a Legend in the world of Jazz.

10:31pm – DRINK! They’re playing music over Herbie. For shame!
Michael: Yay, final award of the night…Um, well, what can I say Jethro Tull did win best Metal record over Metallica. Stick a fork in me, I’m done!

Thanks for sticking with me (Ger)!

Iggy and Tom - Coffee and Cigarettes