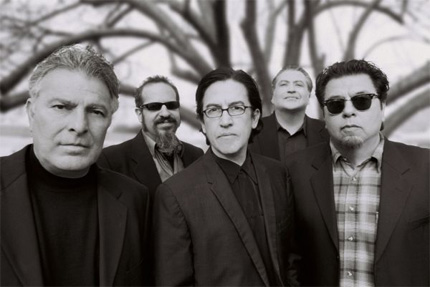 Eleven years had passed since I last saw Los Lobos (1996 at the Electric Ballroom in Tempe). But like fine wine, time only makes them better and intensifies the experience. A gray bearded David Hidalgo and his band mates of thirty plus years took the stage Saturday night at the beautiful, 2-year old Ikeda Theater at the Mesa Arts Center. For the next two hours, the band took us on a journey that clearly showed why they remain one of the tightest, most eclectic bands out there today. It also reminded me how grossly underrated these living legends are. A freakin’ travesty, to be honest.

The band drew from the well of their many studio albums, from 1984’s How Will the Wolf Survive? to 2006’s The Town and the City, as well as traditional favorites like “Volver, Volver”, and of course their most well-known cover, the Ritchie Valens classic “La Bamba”. The band jumps genres effortlessly, from cumbias to roots rockers to classic oldies (Cesar Rosas’ interlude of the Rascals’ “Good Lovin” during La Bamba had the crown going nuts).

As a lefty guitar player myself, I was awed by Cesar’s impressive collection of lefty acoustic and electric guitars. Louie Pérez strummed a mean assortment of guitars – large and small – from the middle of the stage, and took lead vocals on the great “Saint Behind the Glass”, from their Kiko album. Bass player Conrad Lozano was a treat to watch, as he bounced and grooved along to the beat with a permanent grin, clearly enjoying each moment. Steve Berlin manned his station at stage left, providing his signature baritone sax and flute solos throughout the show. Cougar Estrada banged away on his drum kit, laying down the steady, multi-rhythmic beats.

And then there’s the sage-like David Hidalgo. He’s up there in that “I’m not worthy!” category for me. He symbolizes the character of the band: full of talent, class, and humility. David had killer solos on his Telecaster during songs like “One Time, One Night” and “Will the Wolf Survive”. Amazing finger-picking on his acoustic for tunes like “Porro por Pedrito”; and of course his accordion made several quality appearances on tunes like “La Pistola y El Corazon”, “Soy Mexico Americano” and “Volver, Volver”.

The band is just a treat to take in, working as such a cohesive unit. Several of the songs, like the Los Super Seven song “Teresa”, morphed into jam territory, where the guys would trade solos, and elevate the music. Before “Dear Mr. Fantasy”, Cesar acknowledged that element of their fan base by stepping to his mic and asking “We got any hippies out here tonight?”

The last song of the night was the perfect way to end – a Disney tune! The band recently re-recorded their version of “I Wan’na Be Like You (The Monkey Song)” from The Jungle Book (sung in the movie by Louis Prima). With Rosas on lead vocals, it was a fun and spirited tune that left the crowd happy and fulfilled.

Every Los Lobos show I have seen is exactly what I love about music: unpredictable and eclectic. This show was no different. The guys are taking a break until March, but I stress to any music lover who has not seen them live – check these tour dates, mark your calendars, and go check them out. See a band of living legends still very much in their prime.

Encore:
Dear Mr. Fantasy
I Wan’na Be Like You (The Monkey Song)

Of Mekons and Diamonds