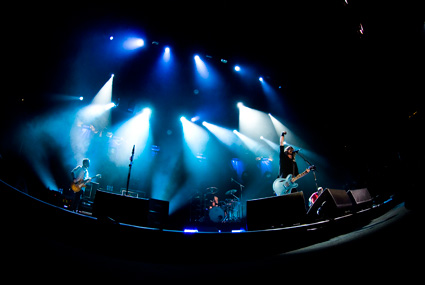 Dave Grohl is truly the savior of arena rock and last night he was received with open arms at one of the Meccas of all things rock. He and his merry band of Foo Fighters took the stage and rocked the Garden for a solid two hours only letting up briefly to show the band’s softer side with a mid-set acoustic break. It astounds me that last night was the first time that the Foos played Madison Square Garden. What further shocked me is it’s the first time Dave Grohl has played the venue (I did some historical digging and confirmed that Nirvana never played MSG either). Despite being ‘first timers’ they managed to make the arena feel like a much smaller venue.

The band kicked the night off with a pair from their latest record, Echoes, Silence, Patience & Grace, with the full 8 piece band (with former-foo Pat Smear on guitar). At the close of “The Pretender” the core group rocked through a set covering every record in the bands 13 year history equally. After an extended jam on the less known (just no less brilliant) “Stacked Actors”, Dave and the returning 8 piece band moved to the other side of the arena for the acoustic set. Here Dave explained to the crowd the honor of playing the Garden and thanked the audience for welcoming them. The highlight for me here was the acoustic performance of “My Hero” which was incredibly powerful (and would have been even better if the drunken frat boy sitting behind me didn’t scream through most of it, but it’s a rock show, right?)

Dave introduced the band and allowed percussionist Drew (I can’t seem to find his last name) to play what is probably the first (and last) “Triangle Solo” ever performed in MSG. Drummer Taylor Hawkins took over vocal duties for the very California “Cold Day in the Sun” followed by one of my personal favorites from their latest record, “But, Honestly”. Dave then dismissed the band back to the main stage to play a haunting solo “Everlong”. The band joined in for the final chorus and the band wrapped the show with the one-two punch of “Monkey Wrench” and “All My Life”. I have to again say here that Dave and co. managed to make MSG seem much more personal as they utilized every bit of the stage and Dave made a point to come to every corner of the stage and rock just for each section.

At the encore break the screens in the backdrop featured a camera trying to focus on the written set list when Taylor and Dave pop up in night vision taunting the audience over how many encore tunes they’d play. We all agreed on three and out they came to treat us to a slowed down, sticky-sweet “Big Me” with the full 8 piece band. Dave brought out a guest drummer for “Long Road to Ruin” named Josh who I found out later was granted a wish by the Make-A-Wish Foundation. Further cementing my theory that these guys are really the most down to earth and friendly ‘rock stars’ you’ll find these days. The night ended with “Best of You” which for me was surreal. The crowd gave back as much as the band was giving and it was truly an amazing experience. There’s something about screaming along with 20,000 fans that leaves you feeling complete and satisfied.

If you missed the show you can catch the highlights of the show on fuse as they taped the show for their new series “Rocks the Garden”. You can find some exclusive back stage footage at fuse.tv. I can’t recommend highly enough checking these guys out when they are local – check the tour dates, get tickets and get ready to enjoy a real rock show.

Let it Die
The Pretender
Times like These
Breakout
Learn to Fly
Cheer Up, Boys (Your Makeup is running)
This is a Call
Stacked Actors

Skin and Bones
Marigold
My Hero
Cold Day in the Sun
But, Honestly

Everlong
Monkey Wrench
All My Life

Big Me
Long Road to Ruin
Best of You

Bonus Video!
Foo Fighters – Best of You* (Video)
*It’s just a step above cell phone quality, but it’s worth it.
[youtube=http://www.youtube.com/watch?v=nXC4XnuEqhw 425 355]