I saw the Blind Boys of Alabama open for Tom Petty many years back. I wish I was at the Knitting Factory in LA a few nights ago to catch the purple one jumping on stage to jam with them on “I’m a Soldier in the Army of the Lord”.

So a few years ago, British electronic duo 7 Hurtz hooked up with Bitch Lap Lap and Peaches for a version of Prince’s “Sexy Dancer”. Bitch Lap Lap? That’s indie queen Leslie Feist. I guess she used to lurk on stage at Peaches shows back in the day and called herself Bitch Lap Lap (they lived together in Toronto for a spell). I did not know that until tonight. You see, I was doing some exhaustive research trying to figure out who was acting out the Brenda part to Peaches’ Apollonia in the song (the banter mimics an inter-song segue on the Apollonia 6 album. Pre-“Ooo She She Wa Wa” to be exact. Yes, I am a 37 year old married father of two, and I know that.). I searched 7 Hurtz’s MySpace page and the only picture of a female I could find was this one… 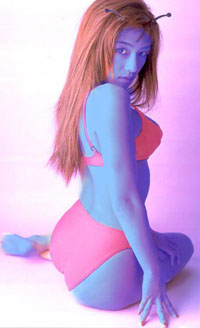 After another minute of research, I discovered that the mystery voice was Feist. I hope you don’t mind, though, that I intend to picture the young lady above when listening to this version. In fact, I’ll picture her in both roles…. as twins. Antennaed twins.

The song appears on an album of Prince covers called ‘Controversy: A Tribute to Prince‘. It’s got some interesting versions from some artists I’d never heard of (except for D’Angelo, who does “She’s Always in My Hair”): Blue States, Stina Nordenstam, Kode Nine and Space Ape, to name a few. A reggae version of “Girls & Boys”? This album’s got it.

So give it a listen. Picture the antennaed twins, and go with them to Prince’s house.

Hittin' the Speed of the Sound of Loneliness